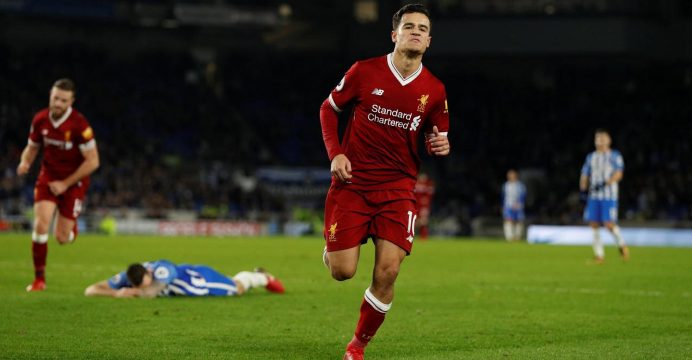 Coutinho shows why he is still Liverpool’s main man

Philippe Coutinho’s importance to Liverpool may be difficult to put a price on following his latest exemplary showing in the 5-1 thumping of Brighton and Hove Albion in the Premier League on Saturday.

The focus in recent weeks has surrounded the impressive Mohamed Salah and rightly so following his rich vein of form where he has found the net seven times in his last four league games to make him the division’s top scorer, reports Reuters.

The Egyptian has played a major part in Liverpool achieving five wins from their last six league fixtures. Only table toppers Manchester City have enjoyed a better run of form.

But Coutinho’s presence is also a defining factor and he was the standout player as the Reds recorded an emphatic victory at the Amex Stadium.

Brighton could not contain the Brazilian forward, who was rested for the midweek win over Stoke City, and was unstoppable as he helped set up three goals and also scored a superb free kick.

Manager Juergen Klopp will be thrilled that his influential talisman has appeared to move on from the speculation that saw him strongly linked with a big money move to Barcelona before the close season transfer deadline.

Should Coutinho continue to play as he did on Saturday, Liverpool will be major contenders for silverware this season.

After setting up Emre Can and Roberto Firmino for the opening two goals, he then produced a sublime piece of skill to get his name on the scoresheet.

The 25-year-old found the bottom corner underneath a free kick wall, evoking memories of a similar strike in an FA Cup quarter-final against West Ham United in February of last year.

Coutinho earned special praise from his manager who also thanked his club analysts for pointing out that he was capable of such a hit in their pre-match preparations.

When asked about Coutinho’s performance, Klopp said: “Very good. I am really happy about it. The free kick – credit to the analysts. He still needs the technique to do it.”

Coutinho has now had a hand in 13 goals in his last 11 Premier League games (seven goals, six assists).

Brighton manager Chris Hughton did not doubt that he is world class and said he was the major difference between the two teams.

The biggest test for Liverpool and Klopp could come again in January if Barcelona renew their interest in the Brazilian.

Liverpool supporters will be praying he stays at Anfield to inspire many more emphatic victories.