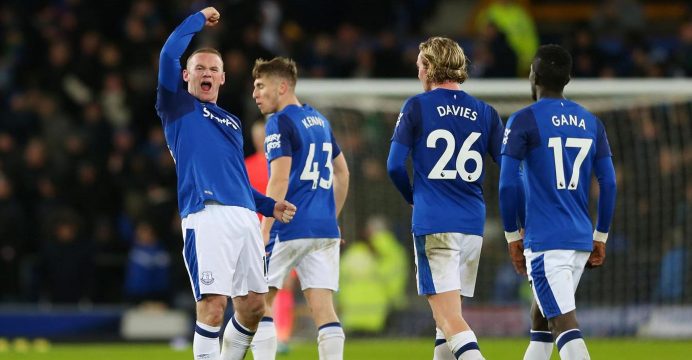 Allardyce was in the stands at Goodison Park on Wednesday after Everton announced he was finalising talks to succeed Ronald Koeman as permanent manager.

Unsworth, Everton’s under-23s coach, has been filling in since Koeman was sacked last month and although he has won only two of his eight games at the helm, Rooney said he had helped steady the ship.

“I’m sure we’ll enjoy tonight, but first of all we’ve got to give thanks to David Unsworth,” Rooney told BT Sport.

“He’s stepped in at a difficult time for the football club. He’s a true Everton person.

“I’m delighted for him we’ve got this victory because it’s an important win for the club, but also for David Unsworth.”

Rooney’s hat-trick was his first for Everton and was completed with an audacious 70-yard lob over his former England team-mate Joe Hart in the 66th minute.

Asked if he had ever scored a better goal, Rooney said: “I don’t think so.

“It’s one of — if not the — best goals I’ve scored. I hit it as well as I’ve ever kicked a football. To make it my first hat-trick for Everton, I’m delighted.”