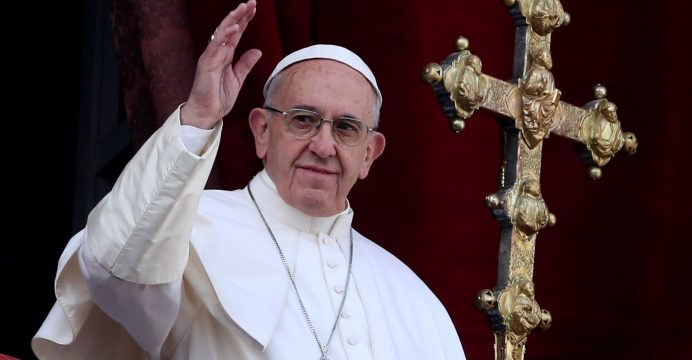 During his visit to Myanmar, the pope made no direct reference to the plight of Muslim Rohingya people to avoid a diplomatic incident with a Buddhist-majority country some have accused of ethnic cleansing.

But in Dhaka, he is expected to touch on the Rohingya issue in his speeches in the Muslim-majority country.

The 80-year-old pontiff is the first pope to set foot in Bangladesh in 30 years. Pope John Paul II visited Dhaka in 1986.

Pope Francis headed to the National Memorial in Savar to pay tributes to the 1971 Liberation War martyrs. He will then visit the Bangabandhu Memorial Museum in Dhanmondi.

He will have a private meeting with President Abdul Hamid at the Bangabhaban.

The pope is scheduled to meet Cabinet members and diplomats at the Darbar Hall inside the presidential palace. He will stay at the Vatican embassy in Baridhara overnight.

On the second day of his official tour, he will lead a mass at a rally at Suhrawardy Udyan. After that, he will meet Prime Minister Sheikh Hasina at the Vatican embassy.

Later in the day, the pope will hold a meeting with bishops at Ramna Cathedral in Kakrail and attend sessions there to preach communal harmony.