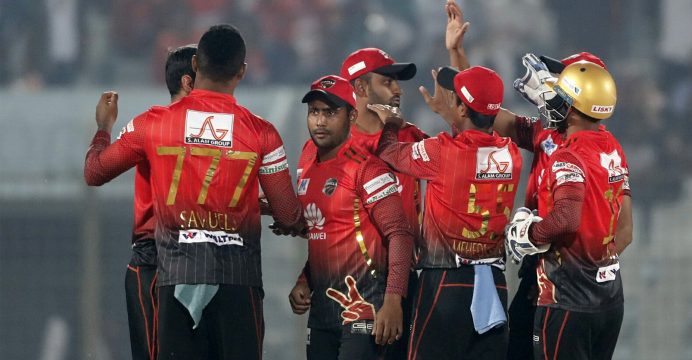 Chasing a winning target of 168 runs set by Comilla, Dhaka Dynamites found the chase stiff and eventually they were restricted at 155 for 8 in 20 overs.

Denly smashed six boundaries and two over boundaries during his 39 ball stay on the crease before he fell to Saifuddin. Kieron Pollard (27), Mosaddek Hossain (17) and Juhurul Ilsam (17) offered some resistance in the end but could not take Dhaka towards the destination.

Dwayne Bravo, who was named the player of the match for his impressive bowling performance, grabbed three Dhaka’s wickets for 31 runs from his four overs. He was well supported by Saifuddin who bagged two wickets giving away 18 runs from three overs.

Earlier, a good opening stand by Tamim Iqbal and Liton Das steered Comilla Victorians to post a competitive total of 167 for 6 from their allotted 20 overs, after they were forced to bat first by Dhaka Dynamites.

The left handed batsman Tamim played a breezy knock of 23-ball 37 laced with five boundaries and during the process he shared 60-run opening stand with Liton Das who chipped away 30-ball off 34 runs hitting three boundaries.

Later, Marlon Samuels blasted 27-ball off 39 runs to help Comilla to set a competitive target in front of Dhaka Dynamites after the departure of Imrul Kayes (26).