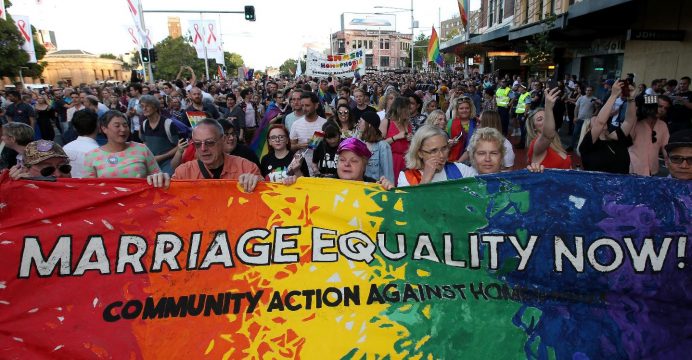 Australia’s upper house Senate on Wednesday passed a measure to legalize same-sex marriage, perhaps as soon as next week, after lawmakers dismissed a conservative push to allow religious objectors to refuse service to same-sex couples.

Australians overwhelmingly endorsed legalizing same-sex marriage in a postal survey run by the national statistics agency and the bill easily passed the Senate by 43 votes to 12.

Conservative lawmakers had pressed for broad protections for religious objectors, among them florists, bakers and musicians, to refuse service to same-sex couples.

But amendments for lay celebrants to refuse to solemnize same-sex marriages and permitting caterers opposed to the unions to refuse service at wedding receptions were either defeated or abandoned during two days of debate in the senate, where same-sex marriage supporters are in the majority.

“The Australian people voted to lessen discrimination, not to extend it and we, the senate, have respected that vote by rejecting amendments which sought to extend discrimination, or derail marriage equality,” Labor Senator Penny Wong, who voted down all the amendments, told Parliament.

The bill moves to the lower house next week, where conservative lawmakers hope for a renewed push to add measures exempting objectors to same-sex marriage from existing laws against discrimination.

“I do not think we have made these changes in a way which advances rights fully,” said center-right National Party Senator Matt Canavan.

Prime Minister Malcolm Turnbull’s Liberal-National coalition government and the main opposition Labor Party have said they wanted to pass the law through parliament by Dec. 7.

If the legislation passes as expected, Australia will become the 26th nation to legalize same-sex marriage, a watershed for a country where some states held homosexual activity illegal until 1997.