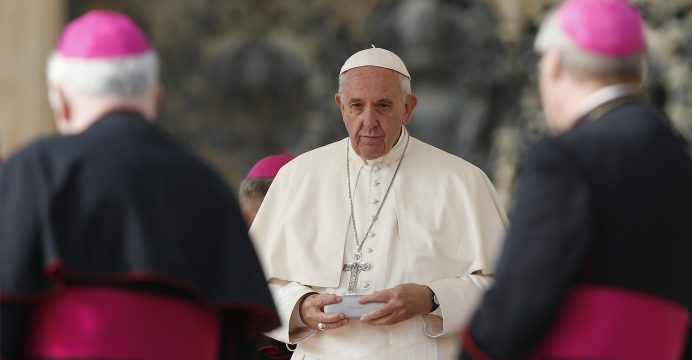 Pope Francis, the leader of the world’s 1.2 billion Catholics, will arrive here tomorrow on a three-day state visit at the invitation of Prime Minister Sheikh Hasina and Catholic Bishop’s Conference of Bangladesh.

President Abdul Hamid will receive Pope Francis, who is now visiting Myanmar, at Hazrat Shahjalal International Airport in Dhaka at around at 3 pm.

“The twofold aspects of his visit is – a state visit because he is the Head of the State of Vatican and a pastoral visit since he is the supreme pastor of the Catholic Church and its Spiritual Head,” D’Rozario, the Cardinal and Arch Bishop of Dhaka said at a press briefing on Monday last.

From the airport, the highest Catholic priest will visit National Martyr’s Memorial at Savar to pay his rich tribute to the memories of the 1971 martyrs at 4 pm tomorrow.

After that Pope Francis will pay his respect to the memories of Farther of the Nation Bangabandhu Sheikh Mujibur Rahman by placing wreaths at his portrait at the Bangabandhu Memorial Museum at 32 Dhanmondi.

On the same day in the evening, the Pope will meet with President M Abdul Hamid at Bangabhaban.

On December 1, more than 80,000 Catholic from Bangladesh Christian community will join a mass prayer with Pope Francis at Suhrawardy Udyan for world “Harmony and Peace”.

In the afternoon, Pope Francis will visit the Vatican Embassy (Apostolic Nunciature) in Dhaka at Baridhara where he will meet with Prime Minister Sheikh Hasina.