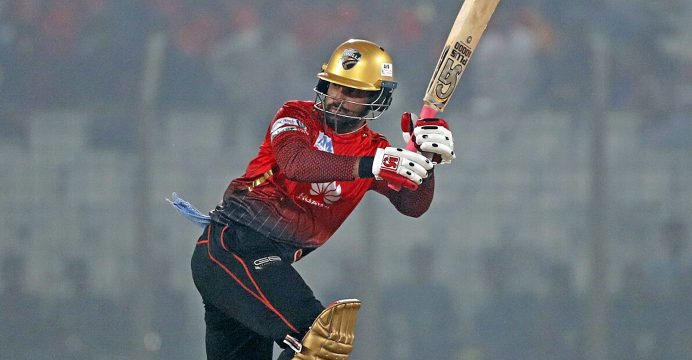 Chasing a paltry winning target of 112-run set by Khulna, Comilla hardly had to sweat as they comfortable reached home in 13.5 overs with nine wickets in hand at Zahur Ahmed Chowdhury Stadium this evening.

Tamim played a classy 64 runs to take Comilla at home along with Imrul Kayes who was remained unbeaten on 21-ball off 22 laced with three boundaries.

The left handed opener Tamim hit 12 boundaries during his 42-ball stay on the crease and also laid the solid platform of Comilla’s victory contributing 64-run for the opening stand with Liton Das (21).

Kyle Abbott was the lone wicket taker for Khulna giving away 27 runs in three overs.

Shoaib Malik of Comilla was named the player of the match for his brilliant bowling spells.

Earlier, fierce bowling spells by Shoaib Malik and Al Amin Hossain saw Khulna Titans dismissed at a paltry total of 111 for all in 19.2 overs, after they opted to bat first.

Khulna Titans suffered early batting jolt losing six wickets at 61 runs in the scoreboard and they could not recovered from their early collapse in the face of tight bowling display by the Comilla Victorians bowlers.

Shoaib Malik and Al Amin Hossain were the most successful bowlers as they claimed three Khulna’s wickets each conceding 14 and 20 runs respectively.

With this win, Comilla Victorians moved into the second position in the points table with 12 points from eight matches while despite the day’s match defeat Khulna Titans remained top in the table with 13 points from ten outings.