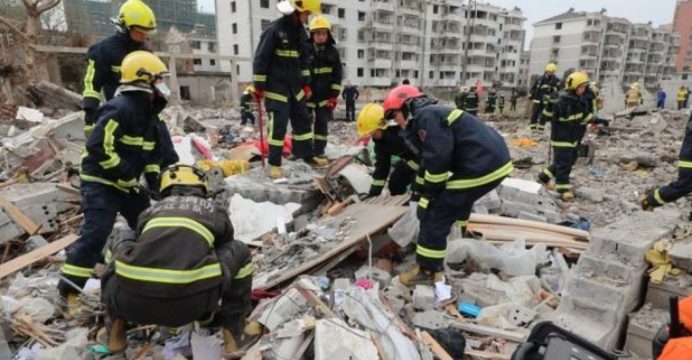 A powerful blast on Sunday morning in a Chinese city south of Shanghai brought down buildings and killed at least two people while injuring many others, state media reported, with police saying the cause had still to be determined.

The explosion struck at around 9 a.m. (0100 GMT) at a factory in Jiangbei district in the port city of Ningbo in Zhejiang province, according to state news agency Xinhua, citing local authorities, witnesses and the Ningbo city’s fire department.

In a separate report, China Central Television (CCTV) did not refer to a factory, but said the force of the explosion shattered windows and punched holes in the walls of buildings as much as a kilometer away.

Images from CCTV showed a few flattened cars and a low-rise building with a collapsed wall. The state broadcaster said it was not a gas explosion, without elaborating further.

A “huge tremor” was felt in the vicinity when the blast hit, CGTN, a network operated by CCTV, tweeted.

CCTV said two people were killed while two others who had been injured were in a serious condition.

Sixteen people have been admitted to hospital for treatment, the Ningbo government said on its Twitter-like Weibo microblog.

According to local Zhejiang Daily, several buildings collapsed in a nearby residential area that had already been cleared of people. Police told Reuters the area had been marked for demolition.

The newspaper said there were no residents at the site of the explosion, though there might be rubbish collectors at work during the time of the blast.

Another photograph posted by People’s Daily showed grey smoke rising over the skyline of the city of Ningbo, about 100 kilometers (62 miles) south of Shanghai.

People’s Daily tweeted that no visible fire was found at the scene, citing local authorities.

Rescue work and investigation into the cause were underway, local police said on Weibo.

Blasts and other accidents are common in China due to patchy enforcement of safety rules, although the government has pledged to improve checks to stamp out such incidents.