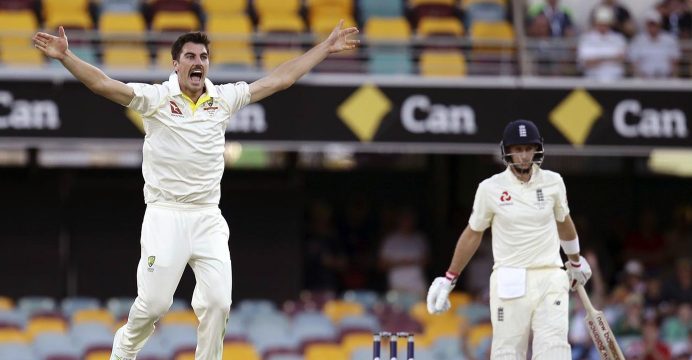 Root looked in good touch with his 160-minute stay before Hazlewood rapped him on the pad to the jubilation of the Australian team.

Paceman Josh Hazlewood claimed the prize wicket of Joe Root to have England in trouble before lunch on the fourth day of the first Ashes Test against Australia at the Gabba on Sunday.

Hazlewood trapped Root leg before wicket for 51 to send the tourists tumbling to 119-5 at the interval, a lead of 93.

At lunch, Moeen Ali was on unbeaten on 26 with wicketkeeper Jonny Bairstow on 1.

Root’s dismissal was a significant blow for England’s chances of building a lead for Australia to chase in the fourth innings with five sessions of play remaining.

Root did not seek a review and left the ground with England in trouble.

Earlier, off-spinner Nathan Lyon removed opener Mark Stoneman to a low catch at slip by Peter Handscomb for 27 and followed up with the wicket of Dawid Malan for four shortly after drinks.

At lunch, Hazlewood had taken three wickets for 38 and Lyon 2 for 36.