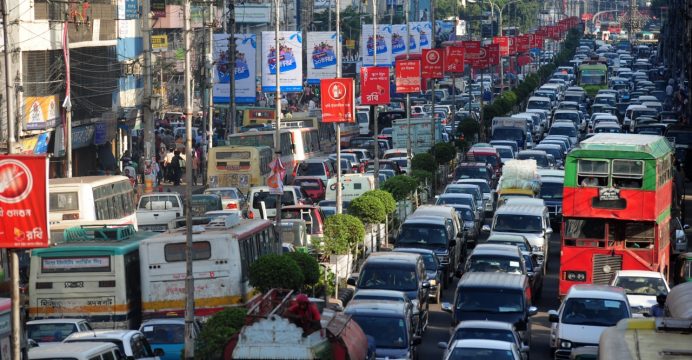 A video showing a traffic policeman standing up to an MP for breaching traffic rules in capital Dhaka has gone viral on Facebook.

The “hero of the day” is seen stopping the car of Jatiya Party lawmaker Selim Uddin in the video, which was shared by one Anowar Hossain Shajib in the Facebook group: Traffic Alert.

Shajib wrote in the description of the video that he and his friend were at the Bailey Road signal when a Prado or Pajero drove in from the wrong direction on the one-way road. A traffic police stopped the car which had an MP inside.

Shajib said they and many others started filming the incident on mobile phones. Seeing the situation getting out of control, the MP got in his car and left the scene, he added.

The incident comes on the heels of a recent police crackdown on VIPs breaking traffic rules.

Selim Uddin, an MP from Sylhet-5 constituency, did not pick up the phone when bdnews24.com tried to reach him.Facebook users are showering the traffic constable with praise for his heroic act.

Many including Shah Mishkat, Habib Ullah Khan, Asadullah Galib and Inam Huq have called him “a hero.”

“You are a hero in the real world, an inspiration. You will be inspired more and become more courageous if you are rewarded,” wrote Huq in the comments section under the video.

“Respect to both the courage of people filming this and the honest officers! We need more examples like this to set straight the lawbreakers- whoever they are!” wrote G M Shafayet Ullah.

One Rahat Alam commented: “This is called traffic policing! Bravo to the officer for upholding the law against a supposed ‘lawmaker’.”

Some have expressed concern whether the brave officer gets to continue his job.

“Can anyone just assure that he hasn’t lost his job already?? We need more officers like this guy,” said one Imran Chowdhury.