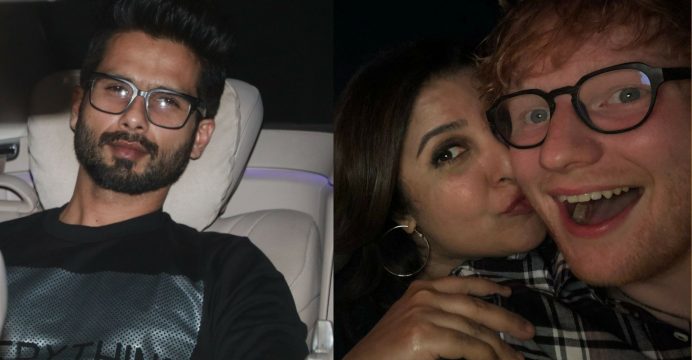 The wait is finally over. Our Shape Of You singer Ed Sheeran is all set to perform at Jio Gardens in Mumbai tonight. But, before that Ed Sheeran enjoyed a lavish party hosted by none other than our favourite Farah Khan. Farah posted a couple of pictures from the party on Instagram, which surely made us Happier.

Farah Khan’s party had all the A-listers. The party was attended by Farah’s close friends like Shah Rukh Khan, Malaika Arora, Neha Dhupia and star kids such as Sara Ali Khan and Janhvi Kapoor, who are prepping for their debut films. Sharing the picture with Ed Sheeran, Farah wrote: “And the party begins!! He loves the shape of me!! @edsheeran.”

Malaika Arora also shared a couple of pictures with Ed Sheeran, and, of course, the hostess – Farah Khan. In one of the pictures, posted by Malaika, Ed Sheeran was sandwiched between Malaika and Farah while in the other Malaika and Ed Sheeran posed for a perfect picture with their friends.

This is what we are talking about:

For Farah Khan, the highlight of the party was her best friend Shah Rukh Khan and Farah can never ‘miss a chance to kiss him.’Shahid Kapoor, who is awaiting the release of his upcoming film Padmavati, was photographed with wife Mira Rajput and Farah Khan.

Other stars, who attended the musical party, were Bhumi Pednekar, Masaba Gupta, Mouni Roy, Sushant Singh Rajput among others.

Ed Sheeran’s concert is a part of the Asian leg of his world tour to support his third studio album Divide. The tickets were sold out within a day of going on sale. Ed will take the stage tonight (November 19) and is expected to perform to his hit tracks like Eraser, Perfect, Hearts Don’t Break Round Here, Happier and, of course, Shape Of You.