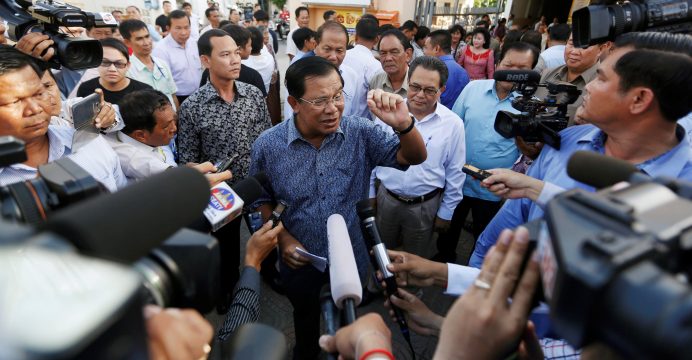 Cambodian Prime Minister Hun Sen challenged the United States on Sunday to cut all aid after it announced it was ending funding for a general election next year in response to the dissolution of the main opposition party, media reported.

Hun Sen, the strongman who has ruled Cambodia for more than three decades, has taken a strident anti-American line in an increasingly tense run-up to a 2018 election that has included a crackdown on critics, rights groups and independent media.

The United States announced on Friday it was ending funding for the election, and promised more “concrete steps”, after the Supreme Court dissolved the Cambodia National Rescue Party (CNRP) at the request of the government, on the grounds it was plotting to seize power.

The party denied the accusation.

The pro-government Fresh News website reported that Hun Sen said in a speech to garment workers that he welcomed the U.S. aid cut and urged it cut it all.

It did not identify the people suspected of serving U.S. policies but added:

“Hun Sen … welcomes and encourages the U.S. to cut all aid.”

The U.S. embassy in Phnom Penh did not respond to a request for comment.

In April, the U.S. embassy announced a $1.8 million grant to assist local elections this year and next year’s general election.