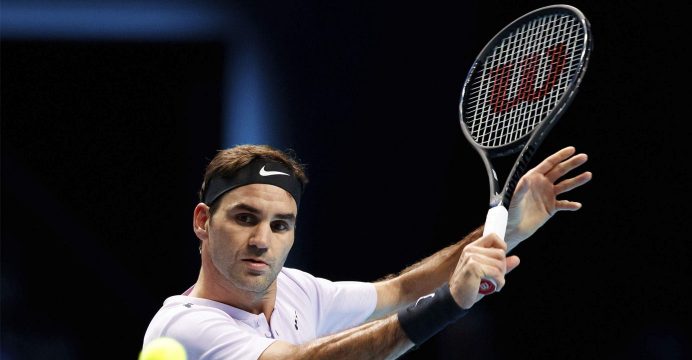 Roger Federer will walk out on court for his 14th semi at the ATP Finals against David Goffin on Saturday as the hot favourite, with the Swiss veteran bidding for a seventh end-of-season title.

In the absence of Novak Djokovic and Andy Murray, the event at London’s O2 Arena was billed as a potential showdown between Federer and Rafael Nadal, until the Spanish world number one was forced out by injury.

Nadal’s withdrawal — after a punishing three-set defeat by Goffin — has given a rather lopsided look to the tournament, with Federer facing Goffin in the semis and, if he wins, either Grigor Dimitrov or Jack Sock in the final.

Federer, who has had an extraordinary season since returning to the Tour after a long lay-off in 2016, will not be losing too much sleep over his opponent, whom he has beaten six times out of six, conceding just two sets in those matches.

In fact he has never lost a single match to any of the remaining players in the competition.

The world number two, who has won the ATP Finals a record six times, but not since 2011, said he was relishing his success at the age of 36, but it felt different from his early days.

“In the beginning it was like being a kid in a candy store, sharing the locker room with legends of the game, seeing them prepare, being able to practise with them, playing doubles with or against them,” he said. “Special times.”

“I’m very calm,” Federer added. “But there’s a deeper understanding of what I’m going through. So maybe the satisfaction is when I do win and I do show up at the best tournaments in the world, like here, I know it’s not normal maybe to be here, so I appreciate it actually maybe even more so now at this age.”

For his part, Goffin, who reached the semis after thumping his good friend Dominic Thiem on Friday, is not going into the match full of confidence, despite his victory against Nadal earlier in the week.

“Honestly, I don’t know what to do tomorrow,” said the 26-year-old Belgian. “But I’m going to try something, something different, something that I’ve never done in the past.”