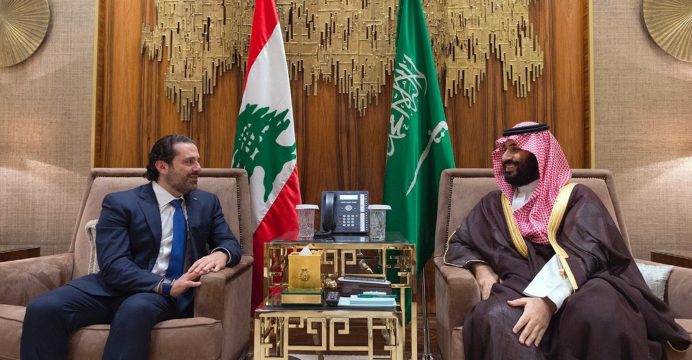 Lebanon’s Hariri to fly to Paris within 48 hours

Lebanon’s Saad al-Hariri is expected to leave Saudi Arabia for France within 48 hours, before flying home to Beirut to officially submit his resignation as Lebanese prime minister, a source close to Hariri told Reuters on Thursday.

Hariri announced his resignation in a televised broadcast from Saudi Arabia on Nov. 4, and has not yet returned to Lebanon. He said on Wednesday he would return soon.

Lebanese President Michel Aoun tweeted on Thursday that he hoped the country’s political crisis was over following Hariri’s acceptance of the French invitation.

“I await the return of PM Hariri to Beirut so we can decide on the situation of the government – if he wants to resign or rescind his resignation,” Aoun said, according to presidential sources.

Aoun has previously said he will not accept Hariri’s resignation until he returns to Beirut to tender it and explain his reasons.

The resignation of Hariri pushed Lebanon to the center of an intensifying regional rivalry between Shi‘ite Muslim Iran and Sunni Saudi Arabia.

Lebanese presidential sources quoted Aoun on Thursday as saying Lebanon remained committed to its policy of “disassociation, especially among Arab states”. The disassociation policy is generally known in Lebanon to mean staying out of regional conflicts. In his interview on Sunday, Hariri repeatedly called for disassociation to be respected.

French President Emmanuel Macron said in a statement on Wednesday that he had invited Hariri to France after speaking to him and Saudi Crown Prince Mohammed bin Salman. The invitation is to visit for a few days and is not an offer of political exile, Macron said, speaking in Germany.

Hariri is expected to go to France with his family, the source close to Hariri said.

Hariri traveled to Riyadh on Nov. 3 before abruptly resigning a day later, and he has remained in the Saudi capital since then. Top Lebanese officials and senior politicians close to Hariri have told Reuters he was forced to quit.

Hariri and Saudi Arabia have both denied he is being held in Riyadh or was coerced to resign.