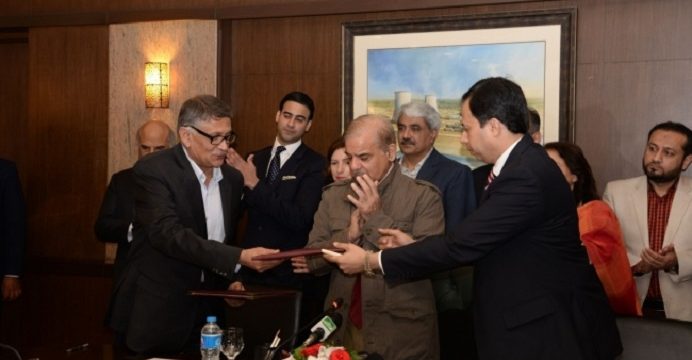 Punjab province, with a population of 110 million, is the largest province in Pakistan, representing more than half of the country’s population.

The provincial government of Punjab in Pakistan signed a Memorandum of Understanding with Novartis to roll out Novartis Access. Poor patients in the province of Punjab will soon have free access to high-quality medicines from the Novartis Access portfolio targeting four key noncommunicable disease areas (NCDs): cardiovascular diseases, diabetes, respiratory illnesses, and breast cancer. The agreement also includes the implementation of innovative software to track and monitor individual patient access and adherence.

“We are very mindful of the warnings from the World Health Organization and World Bank that Pakistan’s chronic disease problem urgently needs to be addressed with high-quality treatment and care,” said Mian Muhammad Shehbaz Sharif, Chief Minister Punjab.

“We are pleased that public-private partnerships like the one with Novartis Access can measurably improve healthcare services and capabilities in the province,” he added.

Punjab province, with a population of 110 million, is the largest province in Pakistan, representing more than half of the country’s population. The agreement with Novartis Access is part of an ongoing program to transform the treatment of NCDs and other diseases in Punjab. Special focus will be on providing quality care in the areas of preventive care, primary and secondary healthcare, drug control and institutional reforms. Novartis Access treatments are among the world’s most frequently prescribed medicines for chronic diseases.

“Novartis Access has been designed to help governments in lower-income countries improve access to treatments for noncommunicable diseases for the poorest populations. Our key goal is to help patients in Punjab better manage their chronic condition with this program. We believe new approaches that bring governments and the private sector together are needed to expand access to medicines and healthcare delivery,” said Dr. Harald Nusser, Head of Novartis Social Business.

The program in Punjab will also involve the deployment of an offspring of the Novartis SMS for Life digital platform, which will use biometric data to create a registry able to help track patient access and adherence. The anonymized data generated by the system will inform both the government and Novartis about disease prevalence, treatment availability and patient outreach, allowing to better serve patients.

In May 2017, Novartis also signed a Memorandum of Understanding with Pakistan’s Ministry of National Health Services to make Novartis Access treatments available through the Prime Minister’s National Health Insurance Program. This program aims to serve the poorest patients in the country through federal facilities and nearly 1 million families are currently enrolled. Novartis is working with other provincial governments in Pakistan to further expand Novartis Access.

NCDs are on the rise in Pakistan. According to the World Bank, chronic diseases account for 59% of the total disease burden in Pakistan and half of all deaths every year in the country.

The World Health Organization states there is a 21% probability of dying between the ages of 30 and 70 years from the four main NCDs, a pattern reflected in the Punjab province. Approximately a tenth of the population is diabetic; 38% is overweight or obese, over half are hypertensive, and over a third smoke tobacco, placing many at higher risk of heart disease and respiratory problems.

The Punjab government is tackling the growing burden of NCDs, particularly through the Punjab Health Sector Plan. Novartis Pharma Pakistan and the Punjab health department recently signed another major health initiative to provide treatment for cancer patients in the province.

Pakistan is the first country in Asia to launch Novartis Access and first deliveries of medicines to the Punjab are planned in early 2018. Novartis Access was first introduced in 2016 through faith-based organizations in Kenya and is underway through national systems or faith-based health systems in Cameroon and Rwanda. Other countries, including Ethiopia and Uganda, are at earlier stages of introducing the program.