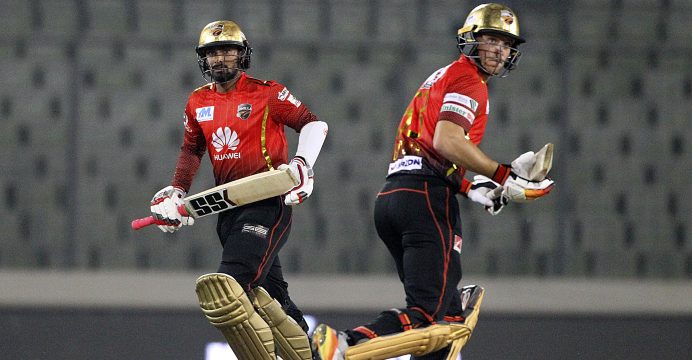 Buttler, Kayes set up emphatic win for Comilla in BPL

Comilla Victorians recorded their second win in the AKS Bangladesh Premier League T20 when they registered an overwhelming nine-wicket victory over Rajshahi Kings in the 12th match of the tournament held on Sunday at Sher-e-Bangla National Cricket Stadium at Mirpur.

With the day’s victory, Comilla Victorians secured four points from three matches while Rajshahi Kings remained at their previous credit of two points from four outings.

Chasing a paltry winning target of 116 runs set by Rajshahi Kings, Comilla hardly had to sweat as they comfortably reached home making 120 runs for the loss of one wicket with 29 balls remaining.

The 27-year old Buttler hit four over boundaries and two boundaries during his 39-ball stay on the crease while Kayes supported him with 41-ball off 44 runs that studded with four fours and a six. Farhad Reza was the only lone wicket taker for Rajshai conceding 31 runs.

West Indies batsman Lendl Simmons top scored for Rajshahi with 23-ball off 40 runs laced with six boundaries and one over boundaries while Farhad Reza made an unbeaten 25 runs off 30 balls to take the team’s total over hundred runs land mark. Skipper Mushfiqur Rahim and Mohammad Sami (10 n.o), the other Rajshahi Kings batsman reached the double figure.

Afghan bowler Mohammad Nabi was the most successful for Comilla as he grabbed three wickets for 15 runs. He was well supported by Pakistani recruit Rashid Khan who claimed two wickets conceding only seven runs. Rashid Khan of Comilla was named the player of the match.