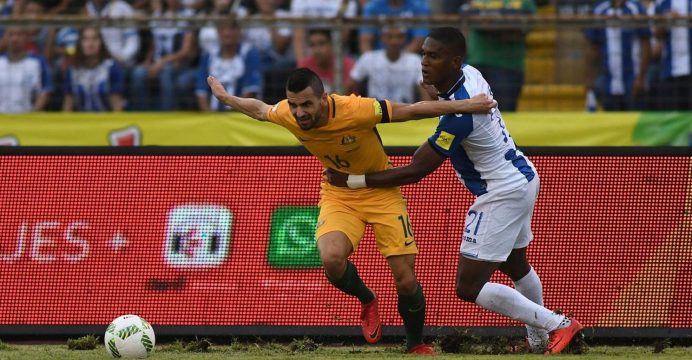 Australia edged closer to a place in the 2018 World Cup finals on Friday after grinding out a hard-fought 0-0 draw with Honduras in their Asia-CONCACAF playoff.

Socceroos striker Tomi Juric missed golden chances in each half as the Australians dominated a physical Honduras side without managing to find a precious away goal at the Estadio Olimpico Metropolitano.

“It was a great performance and the result doesn’t reflect that unfortunately,” Postecoglou said afterwards.

“I thought we were good enough in our play to get one or two goals but at the end of the day we wanted a strong performance and that’s what we got. We’ve got the home game now with our crowd and our conditions so we’re in good shape.”

Despite speculation that veteran striker Tim Cahill could feature after a recent ankle knock, the Australian record scorer remained on the bench throughout with Postecoglou unwilling to risk him on a poor playing surface.

Cahill’s cutting edge was sorely missed as Juric butchered a one-on-one chance in the first 45 minutes before squandering a free header in the second half.

Postecoglou refused to point the finger at Juric afterwards however.

“Tomi put in an enormous shift for us,” the Australia coach said. “He worked really hard, held the ball up when we needed it. I’m sure he would have loved to have got a goal but overall his performance was good.”

Honduras coach Jorge Luis Pinto meanwhile was disappointed with the draw but insisted his team still had a chance of progressing in the away leg.

“I’m not happy because we wanted to win tonight,” Pinto said. “You can win even when you’re playing away,” he added, before admitting Wednesday’s return leg “would not be easy.”