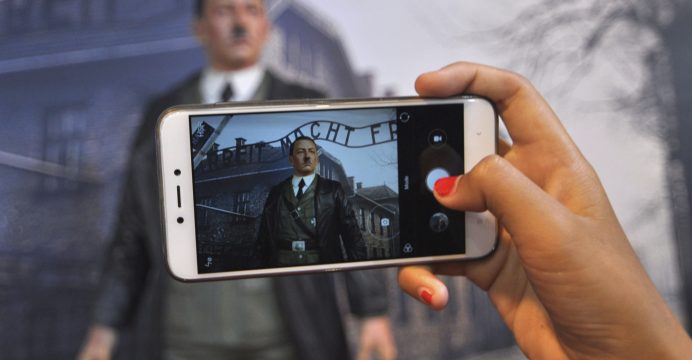 A life-size model of Adolf Hitler used for “selfies” by visitors to an Indonesian museum has been removed.

Pictures shared on social media show people grinning as they pose with the Nazi leader in front of an image of the gates of Auschwitz concentration camp.

It was only when the international community reacted with outrage that the De ARCA Statue Art Museum realised it had caused any offence.

The museum, in Jogjakarta, Java, said it had only wanted to educate.

Pictures on social media show numerous people posing with the fibreglass statue, including a group of young boys dressed in orange uniforms performing a Nazi salute.

It has left many around the world sickened – even if, as the museum originally said, no visitor had actually complained.

Rabbi Abraham Cooper, of Jewish human rights organisation The Simon Wiesenthal Center, told news agency AP: “Everything about it is wrong. It’s hard to find words for how contemptible it is.

“The background is disgusting. It mocks the victims who went in and never came out.”

An estimated 1.1 million people, mainly European Jews, but also groups including Roma gypsies and Soviet prisoners-of-war, died at Auschwitz during the Holocaust.

Some people have blamed a lack of education about the Holocaust on the lack of sensitivity, but Human Rights Watch researcher Andreas Harsono suggested it revealed anti-Jewish feeling in the world’s most populous Muslim nation.

The display, one of about 80 in the museum, came less than a year after a Nazi-themed cafe was shut down in Bandung, Java.