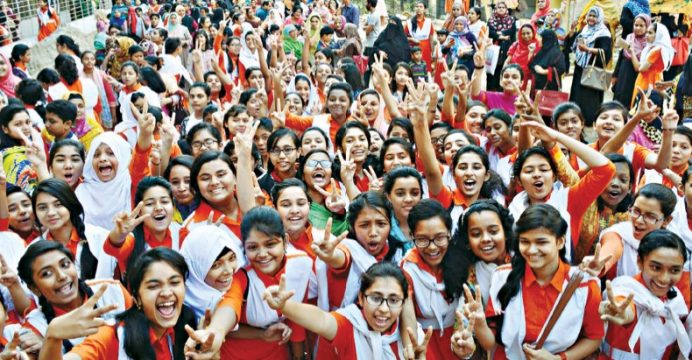 Students are getting not only leaked questions of the ongoing Junior School Certificate or JSC examinations but also their answers via social media apps.

Questions that were put on Facebook as ‘leaked ones’ for English paper-2 and Moral Education, match the ones that have appeared in the actual question papers. This correspondent found some questions of English paper-2 in a Facebook messenger group hours before the start of the paper on Nov 6. The administrator of the group also provided some numbers for receiving payment for the leaked questions. Later the correspondent cross-checked and found that the same questions appeared in the exam.

bdnews24.com has brought the matter to the notice of Tapan Kumar Sarker, examination controller at Dhaka education board.

The ID of the Facebook account and the mobile numbers were e-mailed to him. He said he would approach the police to track down the offender.

With only half an hour left to Islam and Moral Education exam on Tuesday, the same messenger group dished questions that match the ones printed in the actual question paper.

When contacted, Tapan Kumar said: “Bangladesh Telecommunication Regulatory Commission has been informed. They are looking into the matter.”

The group was found active until the evening with announcements of leaking questions of Information and Communication Technology test to be held on Wednesday.

“I cannot describe it as ‘question leakage’. We still do not have any proof,” Tapan said when called again and notified about the announcements.

Government officials have been blaming teachers for the last moment leaks. Some rogue teachers could leak them from the treasury, they believe.

Education Minister Nurul Islam Nahid, who has been cautioning teachers over the matter, could not be approached as he is abroad.

Despite growing calls from educationists and related quarters to stop the menace, the education minister has outright rejected the claims of question leaks. Once he had threatened to make mobile phones and Facebook unavailable to students during board exams.