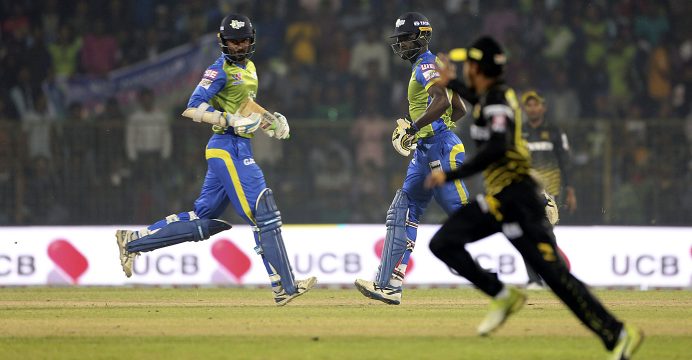 Openers shine as Sylhet Sixers recorded their third consecutive victory in the Bangladesh Premier League T20 when they beat Rajshahi Kings by 33 runs in the sixth match of the tournament held on Tuesday at Sylhet International Cricket Stadium.

Chasing a massive winning target of 206 runs set by Sylhet, Rajshahi Kings found the chase stiff as they finally able to pick up 172 for 8 in 20 overs.

Despite a good 50-run opening stand by openers Luke Right (56) and Mominul Haque (24), the remaining Rajshahi batsmen failed to capitalize their good start in the face of tight bowling display by the Sylhet Sixers bowlers.

English batsman Luke Right, the only half-centurion of Rajshahi innings, hit four over boundaries and three boundaries during his 39-ball stay on the cease before he perished to Kamrul islam while Mominul chipped away 16-ball off 24 runs that studded two over boundaries and a six.

After the departure of two openers, Rajshahi could not come back in the match. New Zealand batsman James Frankline (23-ball of 35 runs)and Farhar Reza (15 n.o) however offered some resistance, but it merely reduced the gap of their defeat.

Abul Hasan and Liam Plunkett were the most successful bowlers for Sylhet as they shared three wickets each conceding 22 and 29 runs respectively.

Earlier, a 101-run strong opening stand by Upal Tharanga and Andre Fletcher helped Sylhet Sixers to post a daunting total of 205 for 6, the highest total of the meet till date, from their allotted 20 overs, after they were forced to bat first by Rajshahi Kings.

The Sri Lankan left handed batsman Tharanga became the most half-centurion till date in the tournament with three successive half centuries, hitting 50 runs in the day’s match.

He faced 37 balls hitting five boundaries and one six for his 3rd fifty before he perished James Franklin with the team’s total stuck at on 105/2 in 11.2 overs.

Fletcher, who provided an ample support to Tharanga contributed 30-bal off 48 runs before he was fell victim of run out. He smashed five boundaries and three over boundaries. Another Sri Lankan left-handed batsman Danushka Gunathilaka, was caught by Farhad Reza, made a quick fire 22-ball off 42 runs studded with two boundaries and three sixes, before Kesrick Williams found him on 169/4 in 17.4 overs.

Later, Cameo Ross Whiteley’s brief hurricane knock of 12-ball off 25 runs 25 off 12 balls and Sabbir Rahman (16 off 14b) helped Sylhet to set amass target for Sylhet. Kesrick Williams bagged two wickets for 39 in four overs while Farhad Reza and James Franklin took one wicket apiece for 38 and 41 runs respectively.