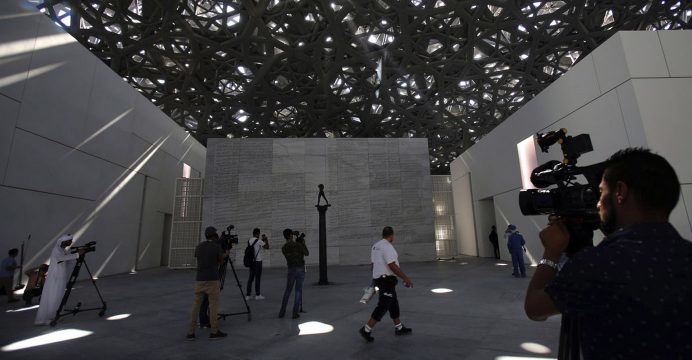 10 years in the making, the Louvre Abu Dhabi set to open

More than a decade in the making, the Louvre Abu Dhabi opens its doors on Wednesday, bringing the famed name to the Arab world for the first time.

The opening comes a decade after France and the UAE agreed to a 30-year partnership initially reported to be worth $1.1 billion, including nearly half a billion dollars for the rights to the Louvre brand alone.

French President Emmanuel Macron will be among those attending the 1600 GMT opening, along with Abu Dhabi Crown Prince Mohammed bin Zayed Al-Nahyan and leaders including Morocco’s King Mohammed VI.

The museum design, by France’s Pritzker Prize-winning architect Jean Nouvel, conjures up the image of an Arab medina as seen through the eyes of a contemporary cinematographer.

A silver-toned dome with perforated arabesque patterns appears to float over the white galleries, creating what Nouvel describes as a “rain of light”.

To reach the ground, each ray of light must cross eight layers of perforations, creating a constantly shifting pattern that mimics the shadows cast by palm trees or the roof of a traditional Arab market.

The Louvre Abu Dhabi is the first of three museums to open on Saadiyat Island, where the UAE plans to launch the Guggenheim Abu Dhabi, designed by Frank Gehry, and Norman Foster’s Zayed National Museum.

Some five percent of the museum, which will open to the public on Saturday, is dedicated to contemporary and modern art, including a monumental piece by China’s Ai Weiwei.

His 23-foot-high “Fountain of Light” is a spiralling structure draped in crystals inspired by communist plans for a massive monument that never actually saw the light of day.