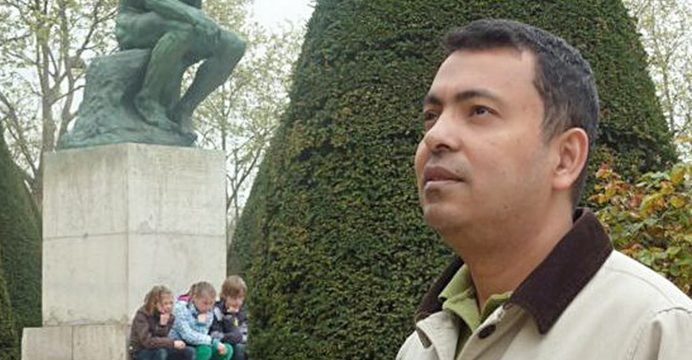 Maj Zia was present when Avijit Roy was murdered in Bangladesh

Counterterrorism police have arrested one person in connection with the murder of blogger and writer Avijit Roy.

A counterterrorism officer told that Sohel is a member of the intelligence team of banned militant outfit Ansar-al Islam, formerly the Ansarullah Bangla Team.

“During an initial interrogation he said he had taken part in the murder on the orders of the organisation’s leader Zia (Major Ziaul Haq).”

Sohel was among the people identified in CCTV footage during the Avijit murder, said police official Yusuf.

Avijit was a regular columnist and the founder of popular blog Muktomona. He is the son of well-known physicist Ajay Roy. Avijit was hacked to death on a footpath at the TSC after he came out of the Ekushey Book Fair on Feb 26 of 2015.

The writer had flown all the way to Bangladesh from the United States to visit the book fair despite threats from militants who were enraged by his write-ups.

His wife Rafida Ahmed Bonya also lost a finger in the machete blows.

Eleven people were accused in the case that Prof Ajay Roy started with the Shahbagh Police Station following the incident, said SI Mozammel.

One of them, Sadeque Hossain Mithu, moved the trial court on Aug 29 for bail but failed to secure it.