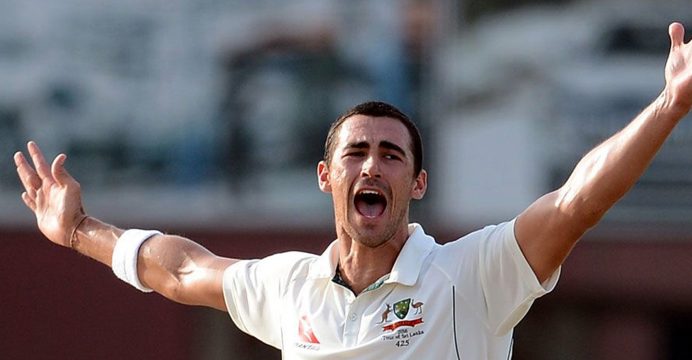 Australia’s pace spearhead Mitchell Starc sent a warning to England’s batsmen with a hat-trick for New South Wales in a Sheffield Shield match in Sydney on Monday.

The left-armer ripped through the Western Australia tail, first bowling Jason Behrendorf, then trapping David Moody leg before wicket before scattering the stumps of Simon Mackin with consecutive deliveries.

Starc finished with four for 56 from 20 overs to go with his career-best haul of eight for 73 against South Australia at Adelaide Oval late last month.

Hazlewood took three for 13 on the way to figures of three for 24 in
Western Australia’s first innings of 176.

Starc and Hazlewood are expected to share the new ball in the opening Test of the Ashes series against England in Brisbane, starting on November 23.