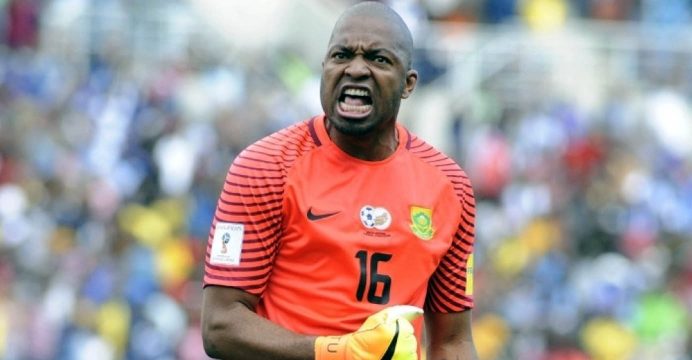 A facial injury has ruled star South Africa goalkeeper Itumeleng Khune out of a must-win World Cup qualifier against Senegal in Polokwane this Friday, the national association said.

He was hurt in a collision with an opponent while playing for Kaizer Chiefs against Chippa United at the weekend in a League Cup quarter-final.

Khune will also miss a second match against Senegal in Dakar on November 14, which South Africa must also win to reach the 2018 finals in Russia.

Reports said Khune could be sidelined for six weeks after sustaining a fracture on the ridge between his eye socket and nose.

Ronwen Williams of SuperSport United and Wayne Sandilands of Orlando Pirates are the other goalkeepers in the “Bafana Bafana” (The Boys) squad.

Veteran Sandilands was beaten by a shot from the centre circle in a club match last week while Williams was criticised after a shock World Cup loss in Cape Verde two months ago.

While South Africa need a maximum six points to win Group D, Senegal need two points to play in the World Cup after a 16-year absence.

Senegalese hopes have been boosted by an earlier-than-expected return from injury of star attacker Sadio Mane of Liverpool.