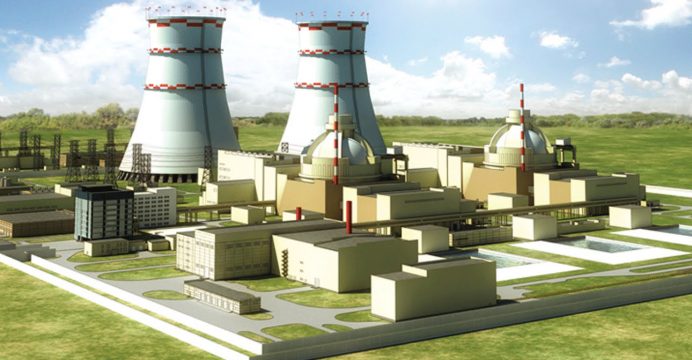 Bangladesh is set to join the world’s nuclear club as 32nd nation on November 30 through the first pouring of the structural concrete for installation of the country’s first nuclear reactor at Rooppur, Pabna, for electricity generation.

Bangladesh will also become 3rd member in the South Asia and 6th member in Asia of the elite club having nuclear infrastructures for electricity generation, said officials, adding that a nation is considered as a nuclear nation after the first pouring of the structural concrete, also known as FCP.

On Saturday evening, science and technology secretary Md Anwar Hossain announced the date of FCP while addressing a programme in Dhaka for handing over the conditional design and construction licence for the Rooppur nuclear power plant, reports New Age.

The government will celebrate the occasion, FCP, in the presence of the prime minister, Sheikh Hasina, said science and technology minister Yeafesh Osman.

The licence would also enable the commission to take all necessary preparations, including issuance of work orders for the main construction for the Rooppur nuclear power plant, Naiyyum told New Age.

He said that the commission would also require obtaining further approval from the regulators for beginning the construction works for the power plant.

The regulators expect to provide the approval in March 2018 if the commission and its Russian contractor could complete their preparation for beginning the main construction of the first nuclear unit, Naiyyum added.

Before issuance of the final approval, the regulators would examine the durability or sustainability of the site where a nuclear reactor would be installed, liquefaction problem of the soil, engineering solution of the embankment on the River Padma to protect the integrity of the nuclear infrastructure, emergency response plan and physical protection preparedness of the power plant, said officials.

The issues are needed to be addressed properly before beginning of the main construction, they said. The commission is also scheduled for second FCP for second nuclear unit in 2018, the officials said. The commission is implementing the country’s maiden nuclear power project worth $13.21 billion with 90 per cent supplier’s credit of Russian Federation. The two-unit Russian built VVER-1200 reactors will be installed at Rooppur, on the bank of the River Padma.

Bangladesh is implementing its first nuclear power project following the Milestone Approach and the guidelines of the International Atomic Energy Agency, the global body to facilitate the nuclear infrastructures in different countries, said the project director Md Shawkat Akbar.

The nuclear power plant with 2,400MW capacity is scheduled for 2023 for commissioning.

Stabilisation of alluvial soil of Rooppur and overcoming its liquefaction problem were the two major challenges for the project implementation authorities, said officials.

The schedule for FCP has been delayed by at least four months mainly due to belated demonstration and submission of relevant document of the soil stabilisation that the site would be able to contain the nuclear reactor, they said.
Officials of BAEC and BAERA said they took the time to ensure safe nuclear infrastructure to be developed on the alluvial soil of Rooppur.