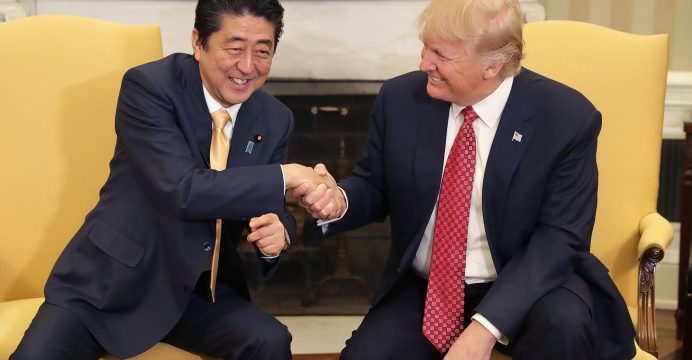 Trump heads to Japan with North Korea on his mind

U.S. President Donald Trump heads to Japan on the first stop of his five-nation tour of Asia on Saturday, looking to present a united front with the Japanese against North Korea as tensions run high over Pyongyang’s nuclear and missile tests.

Trump, who is on a 12-day trip, is to speak to U.S. and Japanese forces at Yokota air base shortly after arriving in Japan on Sunday and looked to stress the importance of the alliance to regional security.

Ballistic missile tests by North Korea and its sixth and largest nuclear test, in defiance of U.N. Security Council resolutions, have exacerbated the most critical international challenge of Trump’s presidency.

In a display of golf diplomacy, Trump is to play a round of golf with Japanese Prime Minister Shinzo Abe. The two leaders also played together in Florida earlier this year.

Trump will also have a state call with the Imperial Family at Akasaka Palace during his visit. Abe and Trump will meet families of Japanese citizens abducted by North Korea.

Joined by his wife Melania on part of the trip, Trump’s tour of Asia is the longest by an American president since George H.W. Bush in 1992. Besides Japan, he will visit South Korea, China, Vietnam and the Philippines.

Trump extended the trip by a day on Friday when he agreed to participate in a summit of East Asian nations in Manila.

His trip got off to a colorful start in Hawaii. He was taken by boat out to the USS Arizona Memorial, where lies the World War Two ship that was sunk by the Japanese during the Pearl Harbor attack in 1941.

The Trumps tossed white flower petals into the waters at the memorial in honor of those who died at Pearl Harbor.

Trump’s trip is to be dominated by trade and how to muster more international pressure on North Korea to give up nuclear weapons.

Trump has rattled some allies with his vow to “totally destroy” North Korea if it threatens the United States and his dismissal of North Korean leader Kim Jong Un as a “rocket man” on a suicide mission.

“What’s inflammatory is the North Korean regime and what they’re doing to threaten the world,” McMaster said.

Trump will seek a united front with the leaders of Japan and South Korea against North Korea before visiting Beijing to make the case to Chinese President Xi Jinping that he should do more to rein in Pyongyang.

Trade will factor heavily during Trump’s trip as he tries to persuade Asian allies to agree to trade policies more favorable to the United States.

A centerpiece of the trip will be a visit to the Asia Pacific Economic Cooperation summit in Danang, Vietnam, where he will deliver a speech in support of a free and open Indo-Pacific region, which is seen as offering a bulwark in response to expansionist Chinese policies.