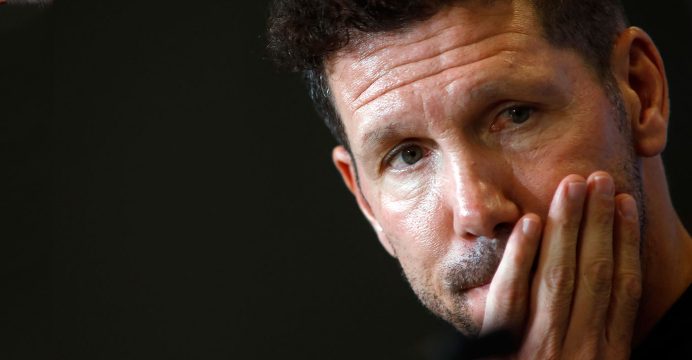 Diego Simeone defended Atletico Madrid’s style as another profligate performance left his side on the brink of an early Champions League exit after being held 1-1 at home by 10-man Qarabag.

Back-to-back draws against the Azerbaijani champions, playing their first ever Champions League campaign, mean Simeone’s men have to beat Roma at home and Chelsea away in their final two games and hope Qarabag perform more miracles to progress to the last 16.

Atletico’s major problem in recent months has been finding the net and their lack of cutting edge was demonstrated as they had the most attempts on goal of any side in the Champions League this season (32) for the reward of a solitary goal.

Club captain Gabi claimed Atletico had lost their “calling card” after also conceding once again from a set-piece as Michel headed Qarabag into a first-half lead – the seventh time Simeone’s men have conceded a headed goal this season.

However, Simeone — who recently renewed his contract to remain in charge of the Spanish side until 2020 — defended his style of play.

“We have always played the same way,” said the fiery Argentine.

“In the past six years we have won 30 or 40 games like this and the only difference is when you score the goal people talk about strength and spirit and, when you don’t, they see the more negative part.”

Atletico have paid a heavy price for a FIFA ban on registering new players until January, meaning club record signing Diego Costa and Vitolo can’t feature until the new year.

And that investment now looks questionable with Atletico, at best, set to drop into the Europa League barring an unlikely combination of results.

“I believe you get what you deserve,” added Simeone

“We have to try to beat Roma and then destiny will decide if we deserve to continue or are eliminated.”

Atletico rallied in the second half to level through Thomas Partey’s fantastic long-range strike into the top corner.

And the hosts had the advantage of an extra man for most of the last half- hour as Pedro Henrique saw red for a dangerous late challenge on Diego Godin.

However, despite the being hemmed in, Qarabag survived as Godin, Filipe Luis and Nicolas Gaitan passed up big chances to snatch Atletico’s first win in the group.

“What hurts most is that we don’t have matters in our own hands, that is the cruel reality,” added Gabi.

“We have to try and beat Roma and hope Qarabag are capable of holding Chelsea.

“At the moment we are out. We have a chance but it is very remote.”