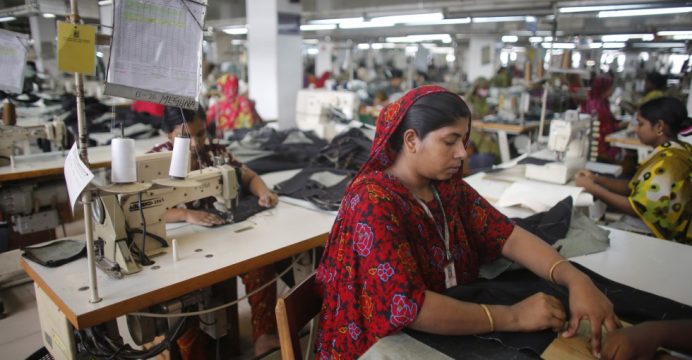 RMG is the most important sector of the Bangladesh economy in terms of export proceeds, domestic value addition, and employment generation. It employs about four million workers in nearly 6000 factories and today around 80% workers of the garments workers are female.

Although employment in the garment industry has improved women’s financial situation, female factory workers are still vulnerable to a myriad of health issues. In addition to limited access to family planning and reproductive health services and products at the workplace, many female workers lack awareness, knowledge, and practice of health commodities.

Over the last several years, there have been increasing efforts to address the health, safety, and wellbeing of garment factory workers in Bangladesh. One such program is HERproject conducted by BSR which is an international organization and one of HERproject’s main pillars is HERhealth, which works for capacity building and workplace strengthening to improve the health-related knowledge and behaviors and access to health services and products of low income working women. The Population Council, under its USAID-funded Evidence Project, partnered with BSR to conduct an operational research study to evaluate the effectiveness of the HERhealth model for improving female factory workers’ Health.

The Population Council has conducted a unique evaluation study titled “Evaluation of the Effectiveness of the HERhealth Model for Improving Sexual and Reproductive Health and Rights Knowledge and Access of Female Garment Factory Workers in Bangladesh” in 10 selected factories of Dhaka, Gazipur and Narayanganj districts in Bangladesh over the last 2.5 years to examine the effectiveness of the HERhealth model.

In his speech as the chief guest, Dr. Sarwar said that “It gives me immense pleasure to notice from the presentation that female workers’ SRH knowledge and utilization such as hygiene management, STI, HIV/AIDS, FP methods etc. has increased remarkably after the intervention. So, we can say the HERhealth intervention and its unique peer health educator model a really successful one.”

The study findings observed notable increases in SRH-related knowledge indicators (i.e. the risk period for pregnancy, safe sexual practices, menstrual hygiene, and SRH service delivery points) in HERhealth factories. For example, In the HERhealth factories, before HERhealth intervention only 32 percent workers knew about drying menstrual cloth in the sun. But after the intervention, 69 percent workers knew about this issue. Similarly, the pregnancy risk-related knowledge has risen from 28 percent to 43 percent after HERhealth intervention.

The study found that knowledge regarding SRH service delivery points decreased over time across all factory types, with significant decreases observed among workers from post-intervention (where HERhealth was implemented earlier) and control factories (where HERhealth is not being implemented). Even after the HERhealth intervention, SRH service delivery points knowledge has decreased from 83 percent to 77 percent in HERhealth factories. This indicates an area in which HERhealth can make improvements in the future.

Almost all workers, regardless of whether they had been exposed to HERhealth, were aware of at least one method of FP (99 percent). However, awareness of emergency contraception was very low across factories: among those who had heard of FP, only 25 percent of female workers from the control factories and approximately 40 percent of female workers from both post-intervention and intervention factories knew about emergency contraception.

Female factory workers who had ever been pregnant were asked about their knowledge of selected pregnancy-related topics. Across all types of factories, one-half did not know the recommended number (four) of ANC visits during pregnancy. Although after the HERhealth intervention, knowledge regarding at least 4 ANC visits during pregnancy period has increased from 48 percent to 66 percent in HERhealth factories.

Among the workers at intervention factories, there was a steep and highly significant increase in the use of sanitary pads between baseline and end line (49 percentage points; from 23 percent to 72 percent). These findings indicate that workers who had been exposed to the HERhealth intervention were more likely to use sanitary pads than workers from other factories. This is likely because those workers had more access to information on menstrual hygiene and to lower cost sanitary pads, through factory subsidies.

Respondents who had ever been pregnant were asked about their service-seeking behaviors during pregnancy. Across all factories, 73 percent reported at end line that they had received antenatal care (ANC), a significant difference from baseline (64 percent).

At the end line survey, almost four out of five workers (81 percent) reported that they had sought services from onsite health facilities at some point in their professional career. It has increased significantly in HERhealth factories from 77 percent to 85 percent after the intervention.

During this study, the evaluation team also talked with the factory management and health service providers and in most of the cases found them positive towards the sound health condition of their workers and also about the good working condition. Most of them now understand that healthy worker can work a better business benefit for them.