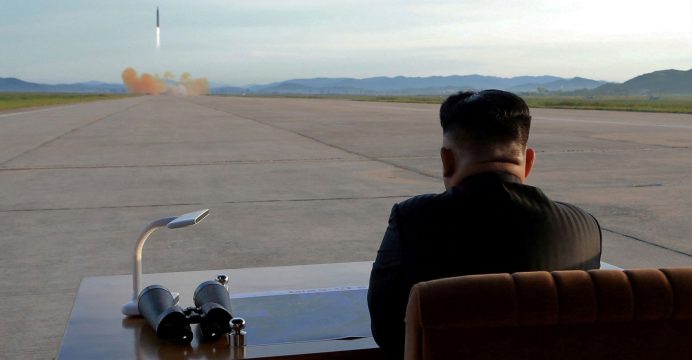 As Mattis peers into North Korea, he gets warning on artillery

As U.S. Defense Secretary Jim Mattis peered into North Korea from a lookout post on Friday, he was given a blunt reminder by his South Korean counterpart of the vast amount of North Korean artillery within range of Seoul.

Above the faint sound of North Korean propaganda music being blasted from across the border, South Korean Defense Minister Song Young-moo suggested that U.S. and South Korean missile defenses simply could not stop all of them.

“Defending against this many LRAs (long-range artillery) is infeasible in my opinion,” Song told Mattis, citing a need for strategies to “offensively neutralize” the artillery in the event of a conflict.

The brief exchange at the inter-Korean Demilitarized Zone (DMZ) – where U.S .President Donald Trump may visit in coming days – spoke volumes about the risks of any miscalculation as tension soars over Pyongyang’s rapidly advancing nuclear weapon and missile programs.

Last week, CIA chief Mike Pompeo said North Korea could be only months away from developing the ability to hit the United States with nuclear weapons, a scenario Trump has vowed to prevent.

U.S. intelligence experts say Pyongyang believes it needs the weapons to ensure its survival and have been skeptical about diplomatic efforts, focusing on sanctions, to get Pyongyang to willingly denuclearise.

But, as the DMZ trip highlighted, North Korea’s conventional weaponry poses such a risk to South Korea that any attempt to denuclearize the North by force could easily escalate into a devastating conflict.

Mattis was keen to emphasize efforts to peacefully resolve the crisis, including at the DMZ, as he addressed reporters with his back to the dividing line between North and South.

“Our goal is not war, but rather the complete, verifiable, and irreversible denuclearization of the Korean peninsula,” Mattis said, as North Korean soldiers kept watch.

Mattis said he and Song also made clear their mutual commitment “to a diplomatic solution to address North Korea’s reckless, outlaw behavior,” when they met this week at a gathering of Asian defense chiefs in the Philippines.

He carried that same message after his helicopter flight back to Seoul, where he addressed a small group of U.S. and South Korean soldiers.

“It comes down to you to make it work, my fine young troops … and we’ll buy time for our diplomats to solve this problem,” he said.

The emphasis on diplomacy came before Trump departs next week on a trip to Asia. He has declined to say whether he will visit the DMZ when he stops in South Korea, telling reporters on Wednesday: “You’ll be surprised.”

Trump, in a speech last month at the United Nations, threatened to destroy North Korea if necessary to defend the United States and its allies. Kim has blasted Trump as “mentally deranged.”

The bellicose verbal exchanges have stoked fears of a military confrontation, but White House officials say Trump is looking for a peaceful resolution.

At the same time, the U.S. and South Korean militaries are looking for ways to deter Pyongyang, and bolster its defenses.

As Mattis at one point met some of the roughly 28,000 American forces stationed in South Korea, he said the role of U.S. and South Korean troops was essential.

“We’re doing everything we can to solve this diplomatically, everything we can. But ultimately our diplomats have to be backed up by strong soldiers, sailors, airmen and Marines, so they speak from a position of strength,” he said.

“So thanks for standing watch, for holding the line.”