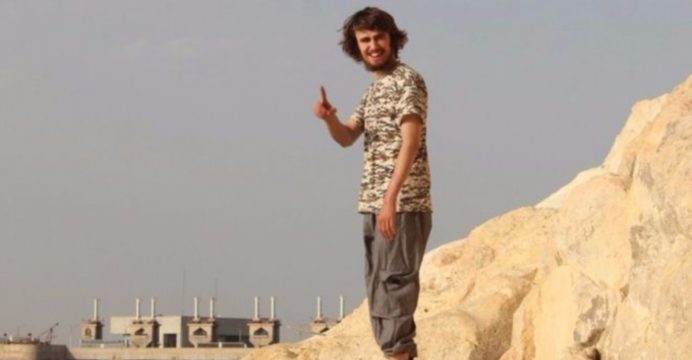 ‘Jihadi Jack’ charged with being IS member

A 21-year-old man from Oxford has been charged with being a member of so-called Islamic State, officials from the Kurdish region of Syria have said.

Jack Letts, dubbed “Jihadi Jack”, travelled to Syria in 2014 and was later captured by the Kurdish-led YPG – the group fighting against IS – when he left IS territory.

Officials told the BBC Mr Letts had been captured in May 2017.

Mr Letts has previously said he opposes IS.

A statement given to the BBC from the Democratic Federation of Northern Syria (DFNS) – a self-declared autonomous region – said Mr Letts had been taken to a prison in Qamishli, northern Syria.

It said the case was still under investigation by the local police force, the Asayish.

It is the first time Kurdish forces have confirmed the capture of Mr Letts as a prisoner of war.

Mr Letts converted to Islam while at Cherwell comprehensive school in Oxford.

He travelled to Jordan, aged 18, in 2014, having dropped out of his A-levels. By the autumn of that year he was in IS-controlled territory in Syria.

He married in Iraq and now has a child.

His parents have denied he went to Syria to fight with IS, and started a petition claiming he had “disappeared in a Guantanamo-style black site” in Kurdish-controlled territory.

But Sinam Mohamad, the European representative of DFNS, strongly disputed this.

“We refute all these baseless allegations,” she said.

Kurdish officials say Mr Letts’ parents have previously written to the head of the Asayish regarding a possible transfer of Jack to Canadian authorities.

Mr Letts – whose father is Canadian – has a Canadian passport.

Officials say the letter said: “We understand that the Asayish must detain and question anyone they believe might have been involved in violent or extremist activities.

“We also accept that Jack will need to be transferred into Canadian custody for questioning and may be arrested when he arrives in Canada. If he has committed any crimes we believe he should face justice and explain his actions.”

“We are willing to work with the Asayish and the Canadians to help resolve this situation as quietly and as quickly as possible,” the letter reportedly added.

His parents said they were grateful to the Asayish for “having treated him well according to international standards of human rights” while in custody.

However, John Letts and Sally Lane say they have had no confirmation Jack is still alive since July.

They conducted a week-long “hunger-strike” in protest, claiming the British government had not done enough to help their son.

Ms Mohamad’s statement added: “The Democratic Federation of Northern Syria’s policy with regard to prisoners of war is clear and fair.

“Despite this fact, the DFNS is not less committed than European countries to treating the fighters from this terror group according to international human rights standards.”

The statement has for the first time shed light on the situation regarding the possible handover of Mr Letts to British authorities.

It said Kurdish officials were willing to hand over prisoners of war to their original country after being properly investigated.

The statement added: “Jack Letts is currently under investigation by local and global anti-terror units.

“Once the investigation is concluded, the outcome will be communicated to Jack’s parents, and their legal representatives and to the officials of relevant governments.

“However, so far there has been no official request from neither Canadian or British governments.”

There has been significant debate over what should happen to British IS fighters who are still in Syria.

Earlier this week, Rory Stewart, the minister for international development, said those who are there are “a serious danger to us”.

“Unfortunately the only way of dealing with them will be, in almost every case, to kill them,” he said.

However, security minister Ben Wallace has previously told the BBC that the government’s preference is for suspected IS fighters to be returned to the UK to face prosecution.

“We have planned and prepared for the risk posed by British returnees as Daesh (IS) is defeated,” he said.

“Our ultimate aim is to prosecute, but it’s not straightforward.”

Mr Letts and Ms Lane have pleaded not guilty to charges of funding terrorismafter being accused of sending cash to their son.

Their solicitor has said they have declined to comment.

The Foreign Office said: “The government is unable to provide support to British nationals in Syria as the UK government does not have consular representation there.”