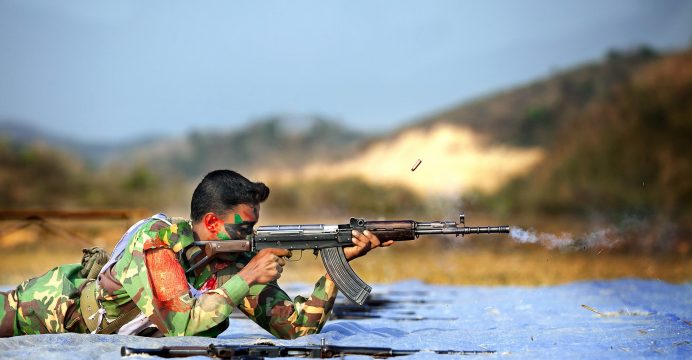 Bangladesh Army personnel have detained six members of the police’s Detective Branch for allegedly kidnapping a businessman and extorting Tk 1.7 million in ransom from his family before releasing him at Teknaf in Cox’s Bazar.

The money was also recovered from a car flagged down by the army on the marine drive’s Shaplapur early on Wednesday morning.

An army officer stationed at the camp to supervise the distribution of relief goods among the Rohingya refugees said, “Their personnel detained the six detectives from the car at a check post, but another fled.”

The detective officer who fled has been identified as Sub-Inspector Moniruzzaman.

He later said Cox’s Bazar district police have formed a five-strong committee to investigate the incident.

Police gave back the money to the businessman and took custody of the seven detectives, the ASP said.

He told bdnews24.com some people, posing as police detectives, picked him up on a microbus when he left a restaurant in Cox’s Bazar after having a meal on Tuesday afternoon.

“They confined me to a house at an unknown place and tortured me overnight. They took me to the marine drive around 2:30am (Wednesday) and threatened to kill me,” he said.

“The DB policemen demanded Tk 10 million ransom from me. I talked to my family on the phone at the time. The detectives agreed to release me when I offered them Tk 1.7 million.

“They released me when my family paid them at Moheshkhalia Parha on the marine drive,” he said.

Gafur’s brother Teknaf Municipality Councillor Moniruzzaman told bdnews24.com that the family contacted the army immediately after the alleged abductors demanded the ransom. “The army helped recover the money after my brother was released,” he said.