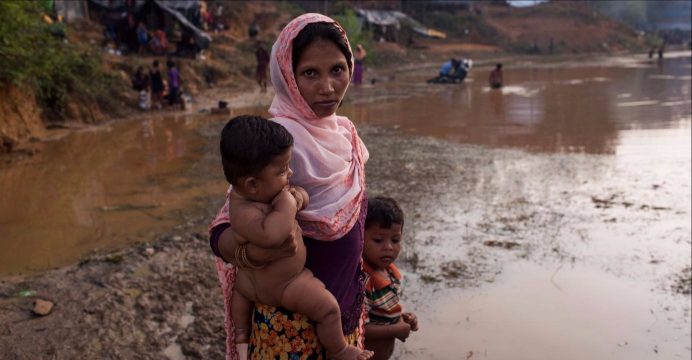 The warning comes as representatives of donor governments and humanitarian organizations meet in Geneva for a pledging conference aimed at drumming up resources for what remains a severely under-funded emergency.

“The needs of refugees and those of the communities hosting them are increasing at a much faster pace than our capacity to respond. We need more resources and we need them now.”

On 7 September 2017, newly arrived Rohingya refugees sit at Shamlapur beach in Cox’s Bazar district, Chittagong Division in Bangladesh, after traveling for 5 hours in a boat across the open waters of the Bay of Bengal. * PHOTO CREDIT – UNICEF

lose to 1.2 million people – including new arrivals, Rohingya refugees who fled Myanmar in previous escalations of violence, and vulnerable Bangladeshi communities – need humanitarian assistance in Cox’s Bazaar. Some 720,000 of them are children.

There is an acute shortage of water, sanitation and hygiene facilities in the refugee settlements, with an average of 100 people per latrine.

“Given the current population density and poor sanitation and hygiene conditions, an outbreak of cholera or acute watery diarrhoea, which are endemic in Bangladesh, could kill thousands of people residing in temporary settlements,” Beigbeder said.

Measles has been reported among the settled population as well as new arrivals. UNICEF is working towards accelerating the routine immunization schedule, which will include the host community.

There are also reports of parents and caregivers who say they are unable to care for their children because of their vulnerable emotional and psychological state. Many adolescents have taken on additional roles as caregivers and providers, helping with distributions, collecting firewood and caring for their elderly relatives or siblings. At least 900 children are living in child-headed households.