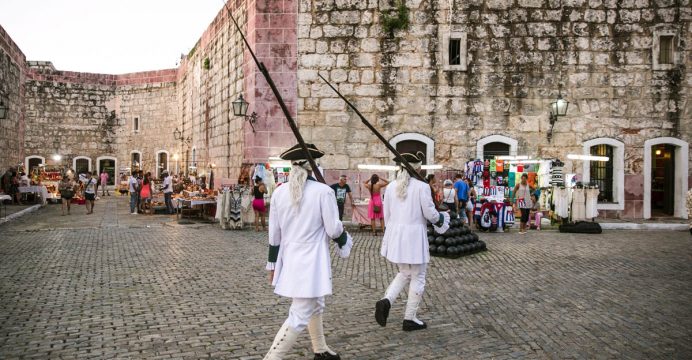 Reenactors dressed in their 18th century military regalia walk by the tourist booths for their 9 p.m. cañonazo ceremony, where they do a formal procession and fire a cannon, at the Fortaleza de San Carlos de la Cabaña in Havana. Monday June 28, 2016.
CultureArts
Oct 24, 2017 Rafiuzzaman Sifat -

At dusk, when the worst of the Caribbean heat has subsided, parks around Cuba fill with families video chatting with loved ones abroad or scrolling through social media, their animated faces lit by telephone and tablet screens.

The introduction of Wi-Fi hotspots in Cuban public spaces two years ago has transformed the Communist-run island that had been mostly offline. Nearly half the population of 11 million connected at least once last year.

That has whet Cubans’ appetite for better and cheaper access to the internet.

“A lot has changed,” said Maribel Sosa, 54, after standing for an hour with her daughter at the corner of a park in Havana, video chatting with her family in the United States, laughing and gesticulating at her phone’s screen.

She recalled how she used to queue all night to use a public telephone to speak with her brother for a few minutes after he emigrated to Florida in the 1980s.

Given the relative expense of connecting to the internet, Cubans use it mostly to stay in touch with relatives and friends. Although prices have dropped, the $1.50 hourly tariff represents 5 percent of the average monthly state salary of $30.

“A lot more could change still,” said Sosa. “Why shouldn’t we be able to have internet at home?”

A tiny share of homes has had broadband access until now, subject to government permission granted to some professionals such as academics and journalists.

The state telecoms monopoly has vowed to hook up the whole island and connected several hundred Havana homes late last year as a pilot project. In September, it said it would roll that service out nationwide by the end of 2017.

Cubans say previous promises for such access have not been fulfilled, so their expectations are not high. They also say the cost is prohibitive, with the cheapest monthly subscription priced at $15.

Havana says it has been slow to develop network infrastructure because of high costs, attributed partly to the U.S. trade embargo. Critics say the government fears losing control.

Cubans who can afford it flock to Internet cafes and 432 outdoor hotspots where they brave ants, mosquitoes and the elements.

Here they laugh, cry, shout, and whisper. Black market vendors weave in and out among them, trying to hawk pre-paid scratchcards allowing Wi-Fi access. The ping of incoming messages and ring of calls fill the air.

“There’s absolutely no privacy here,” said Daniel Hernandez, 26, a tourist guide, after video chatting with his girlfriend in Britain.

“When I have sensitive things to talk about, I try shutting myself into my car and talking quietly.”

The quality of connections is often good only at specific spots, he said, and when fewer users are connected. Otherwise, the screen tends to freeze mid-chat.

Hernandez said he also uses the internet to search for news. In Cuba, the state has the monopoly on print and broadcast media.

A few meters further on, Rene Almeida, 62, sat in his taxi checking email. He said he felt lucky that his two children had moved to the United States where communications are better than ever. It was only in 2008 that the government first allowed Cubans to own cell phones.

He, too, complained of the lack of privacy and the expense.

“It’s better than nothing,” he said. “But it should improve. It will.”