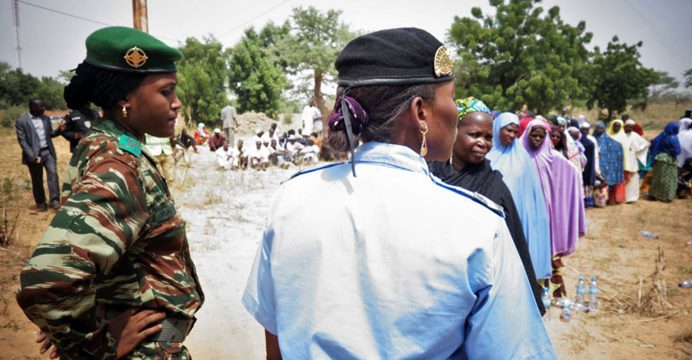 More than 650 members of communities, authorities, civil society and security forces participated in a crisis simulation exercise organized by IOM, the UN Migration Agency on 17 October in Zinder, Niger, close to border areas which regularly suffer from security incidents linked to the Boko Haram armed group, among others.

This activity was the second crisis simulation exercise held this year as part of the project Engaging Communities on Border Management in Niger, funded by the United States Department of State.

Similar to the first simulation exercise, held in March of this year, this activity tested the ability of the authorities to respond to a sudden crisis triggering a mass population movement across the border into Niger. Moreover, it tested the implementation of the national contingency plan which was drafted based upon the results of the first exercise.

“IOM believes in an inclusive border management approach, gathering both national authorities and communities to respond to the most urgent situations and help the populations in need while ensuring security,” explained Baptiste Amieux, Head of IOM Niger’s Integrated Border Management Head of Unit.

In addition to building capacity of authorities in responding to cross-border crises, simulation exercises helped strengthen the involvement of local populations in crisis response, and build on their roles as host communities for affected populations.

Community engagement is crucial as it fosters better cooperation with authorities acting at Niger’s borders. Communication between communities and authorities can not only assist in the management of a crisis situation, but also in the prevention of future crises.

Added Amieux: “That’s why we decided to organize these events on a regular basis for different regions across Niger.”

Due to the development of contingency plans following the first exercise in March, significant improvement has been observed, notably with regards to border crossing management and general coordination between security forces and state rescue services, the IOM official explained.

Upon conclusion of the exercise, one 40m² tent was handed over to the Zinder Governorate, and 300 hygiene kits were distributed to participating community members.