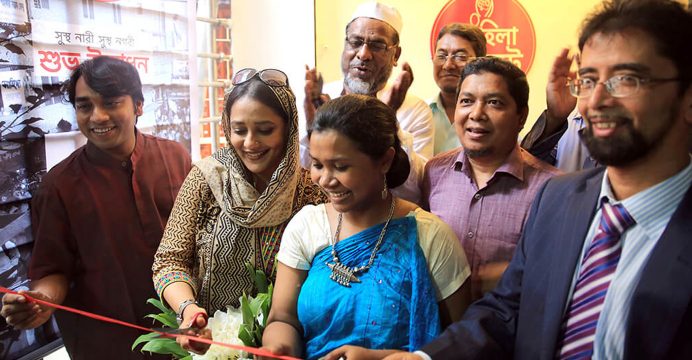 Advanced and Secure Toilet Facilities for Women in Dhaka

“Healthy women, healthy city” – this is the slogan used to launch Dhaka’s first modern, sanitary and safe toilets specifically targeting women. The official inauguration of the first toilet, located on the third floor of Noor Mansion in Gawsia Market, took place today afternoon, Thursday (19 October, 2017), with renowned actress and architect Aupee Karim cutting the ribbon. Dr. Foysol Chowdhury, Director of Innovation at BRAC, was present at the time along with the area’s leading business owners.

Only women will be able to enjoy the facilities of these toilets. To ensure security, two women staff will be on standby from day till night. In addition to them, a cleaning worker will be available at all times. To maintain cleanliness and prevent waterlogging, only the best materials have been used for the toilet. With a funding of around BDT 500,000 from BRAC, a social enterprise called Bhumijo has implemented the pilot project. With cooperation from Dhaka City Corporation, the renovation of the market’s toilet was carried out to achieve such a result.

Aupee Karim stated that, “being able to participate in such a unique initiative gives me great joy. I hope that those who are using and those who are maintaining this facility remain properly accountable.”

“BRAC has been working on women’s rights and safety from the very beginning. With support from the communities, we will be able to scale the solutions across the city,” said Dr. Foysol Chowdhury.

The organisers have stated that 32 locations have been chosen to build similar facilities keeping various factors in mind. These locations include Gawsia, New Market, Farm Gate, Moghbazar, Malibagh, Mouchak, Uttara and Mirpur among others. The toilet and its facilities will be open for service from 10 am till 9 pm at night. Currently individuals will be charged a fee of BDT 10 for using the toilet.

Bhumijo’s Co-Founder Farhana Rashid mentioned that a survey of 200 people was conducted between 2016 and 2017. The results revealed that 80 percent of the women did not drink water before leaving their homes out of fear from using public toilets.