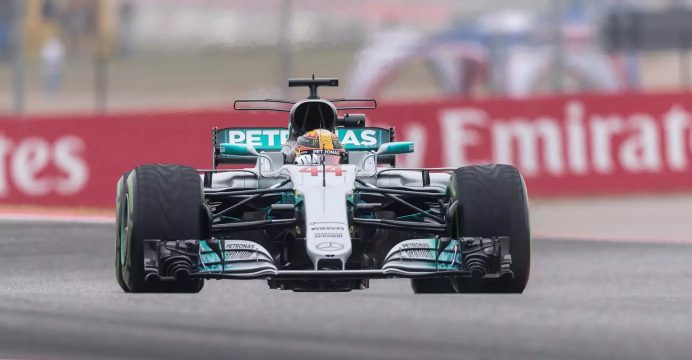 Formula One title favourite Lewis Hamilton led the way in first free practice at the U.S. Grand Prix on Friday with a lap half a second faster than his closest rival Sebastian Vettel‚Äôs best effort.

The Mercedes driver, who can secure a fourth championship on Sunday if results go his way, lapped a soggy Circuit of the Americas in a time of one minute 36.335 seconds on the supersoft tyres.

Ferrari‚Äôs Vettel, who is 59 points adrift of the Briton with four races remaining, was the second fastest man on track in 1:36.928.

McLaren‚Äôs Stoffel Vandoorne was an eye-catching fifth for the struggling former champions, but team mate Fernando Alonso failed to set a timed lap due to a hydraulic leak that kept mechanics busy.

Hamilton, who has won all but one of the five races since the August break, is clear favourite to win again on Sunday at a circuit where he has been triumphant four times in the last five years.

He will have to finish first or second on Sunday, and hope Vettel has a nightmare for the fourth race in a row, to prevent the championship fight remaining open to the next round in Mexico.

While much of the attention was on the title rivals, Spaniard Carlos Sainz and New Zealand debutant Brendon Hartley also caught the eye with strong performances.

Sainz, moving to Renault from Toro Rosso in place of the dropped Briton Jolyon Palmer, was 10th and immediately quicker than established German team mate Nico Hulkenberg in 13th.

Hartley, who will have a 25-place grid penalty for his debut, stepped into a single seater for the first time since 2012 and looked at home straight away with the 14th best time of the morning.

That was 2.932 seconds off Hamilton‚Äôs pace.

The Le Mans 24 Hours winner did more laps (28) than anybody and was also 1.2 seconds quicker than Indonesian Sean Gelael, replacing Russian Daniil Kvyat for first practice only.

Rain before the session started left drivers lapping on a drying track.