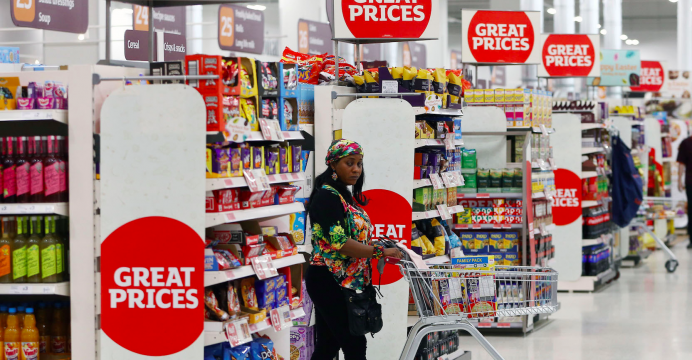 UK inflation at highest since April 2012

The UK’s key inflation rate hit its highest for more than five years in September, driven up by increases in transport and food prices.

The pick-up in inflation raises the likelihood of an increase in interest rates next month.

The figures are significant because state pension payments from April 2018 will rise in line with September’s CPI.

Under the “triple lock” guarantee, the basic state pension rises by a rate equal to September’s CPI rate, earnings growth or 2.5%, whichever is the greatest.

Business rates will go up by September’s Retail Prices Index (RPI) of 3.9%.

The fall in the pound since last year’s Brexit vote has been one factor behind the rise in the inflation rate, as the cost of imported goods has risen.

ONS head of inflation Mike Prestwood said: “Food prices and a range of transport costs helped to push up inflation in September. These effects were partly offset by clothing prices that rose less strongly than this time last year.”

Inflation has hit a five year high and is now 0.9% above the rate of wage growth – meaning that the incomes squeeze is becoming tighter.

And if you are employed in the public sector – where pay rises are capped at 1% – or rely on benefits – which are frozen – that squeeze is even tighter.

With poor economic growth figures and uncertainty over the Brexit process, the Bank of England’s decision on whether to raise interest rates next month is finely balanced.

Yes, “price stability” is the main purpose of the Bank of England’s monetary policy committee which makes the decision.

But many believe that inflation may now have peaked as the effects of sterling’s depreciation following the referendum dissipate.

An interest rate rise now, which increases prices for millions of mortgage holders and could dampen economic activity, could be just the medicine the economy doesn’t need.

The Bank of England is tasked with keeping CPI inflation at 2%, and last month its governor, Mark Carney, indicated interest rates could rise in the “relatively near term” if the economy continued on its current path.

The governor of the Bank of England has to write a letter of explanation to the chancellor if the inflation rate is more than 1% either side of the 2% target.

On Tuesday, Mr Carney told MPs on the Treasury Committee that “inflation rising potentially above the 3% level in the coming months is something we have anticipated”, because of the fall in the value of the pound.

He said he expected inflation to peak in October or November, and at that point he thought it would be “more likely than not that I would be writing on behalf of the Monetary Policy Committee (MPC) a letter to the chancellor.”

Laith Khalaf, senior analyst at Hargreaves Lansdown, said: “The tick upwards in inflation will increase expectations of a rate rise from the Bank of England later on this year, stoked by a flurry of hawkish rhetoric coming from Threadneedle Street.”

However, he added, it is not a foregone conclusion, “so it’s probably best not to count those chickens until they’re hatched”.

Suren Thiru, head of economics at the British Chambers of Commerce, said the organisation expected inflation to peak “shortly, before easing back in 2018 as the impact of the post-EU referendum slide in sterling drops out of the calculation”.

As a result, he said the Bank of England’s policymakers “should resist the temptation to raise interest rates, particularly during this period of heightened political uncertainty”.

Pensioners will be celebrating again. Today’s CPI inflation figure means they will get a 3% rise next April, their largest pension increase for six years.

Those on the new state pension will see their weekly income rise to £164.

Compare that to workers, who’ve seen their earnings rise by 2.1% over the last year.

This is all thanks to the triple lock, which sees the state pension rise by the highest of earnings, prices or 2.5%.

Food for thought for the chancellor, perhaps, who’s reported to be considering tax concessions for younger people in his forthcoming budget, to even-up the inter-generational unfairness that the triple lock has contributed to.