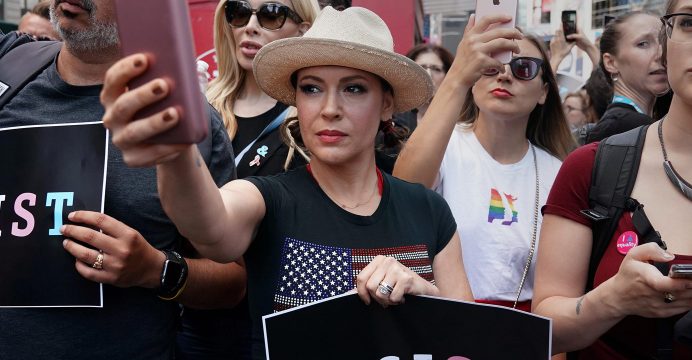 Millions of women across the world have been sharing their experiences of sexual harassment and abuse in an online campaign using the hashtag #MeToo on Twitter and with rolling posts on Facebook, reports Reuters.

The social media meme was sparked by “Charmed” actress Alyssa Milano on Sunday, who asked her followers to reply “Me Too” if they had ever been sexually harassed or assaulted.

It was a reaction to sexual abuse allegations against film mogul Harvey Weinstein, who has denied having non-consensual sex with anyone.

Milano’s original tweet received over 37,000 comments, and the hashtag was one of the top trends on Twitter in Britain and the United States. On Facebook, around 7 million people were discussing “Me Too” on Monday afternoon.

“I’ve lived through it and way too many others have as well,” Twitter user Concertange wrote of the issues raised by the trend. “It’s not okay and it needs to be taken seriously and needs to stop happening.”

Some men who said they were also victims of sexual assault took to the social media to share their stories, including one of the stars of Broadway musical “Hamilton,” Javier Munoz.

“I don’t know if it means anything coming from a gay man, but it’s happened. Multiple times,” he tweeted.

In France, where prevalent sexism has regularly triggered calls to end a code of silence, journalist Sandra Muller, sparked a similar outpouring of sharing under the hashtags #balancetonporc and the phrase’s English equivalent, #squealonyourpig.

Radio journalist Anais Dent was one of those sharing her story, writing: “First journalism internship in Paris, I was 18. The editor in chief kisses me against my will. He’d just had a baby. #balancetonporc.”

In a sign that tolerance of such acts is receding in France, on Sunday President Emmanuel Macron said he had started proceedings for Weinstein to be stripped of his Legion d‘Honneur, France’s highest award.

A number of women have said Weinstein sexually harassed or assaulted them in incidents dating back to the 1980s. The New York Police Department has said it is investigating a 2004 allegation of sexual assault by Weinstein.