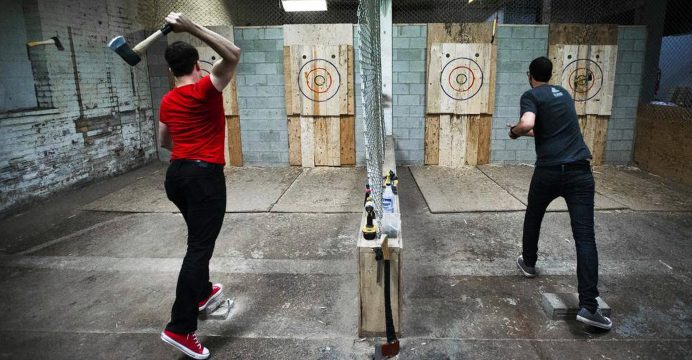 What better, safer way to have fun than drink beer and throw a hatchet? This is now a thing in America, a new pastime, and it’s spreading.

On a busy Friday night at Stumpy’s Hatchet House in New Jersey, it sounds like this: the thud of the blade sticking into a wooden target, people cheering a good toss, and a bell ringing out when somebody scores a bull’s eye.

Its four founders say this place, which opened 18 months ago, is the first of its kind in the US, although Canada is generally considered the cradle of competitive hatchet-hurling.

Such spots are now found in Chicago, Washington, Nashville and Denver, among other US cities.

Stumpy’s owners are talking about opening another elsewhere in New Jersey and have even started offering franchise arrangements. They hope to have a network of 15 within a year.

“This is the next bowling,” said Kelly Josberger, a former elementary school principal aged 51 who decided to change careers. Like her three partners, she had never before run a business. “Even if you’re bad, you still have fun. With bowling, if you’re not good at it, it’s not really as fun,” said Joseph Cavanagh, 27, who came to Stumpy’s with friends to celebrate his birthday.

Participants say it takes about a half hour of practice to master the trick of throwing the hatchet so it spins right and sticks in the target, which is replaced several times a day.

“I think it’s good because it’s different and you’re active and it’s more hip than bowling,” said Jessica Hill, 34, a pharmacist and friend of Cavanagh.

And it’s all kind of natural here. There are no TVs or neon lights. People feel sophisticated, in a rustic way.

On this particular night most of the crowd are young people, men and women in roughly equal numbers.

But many say they have also seen people in their 60s come and give it a try, at the rate of 40 dollars a person for two hours.

Tim Foley likes the sense of danger the game entails.

“It makes it more interesting,” he said.