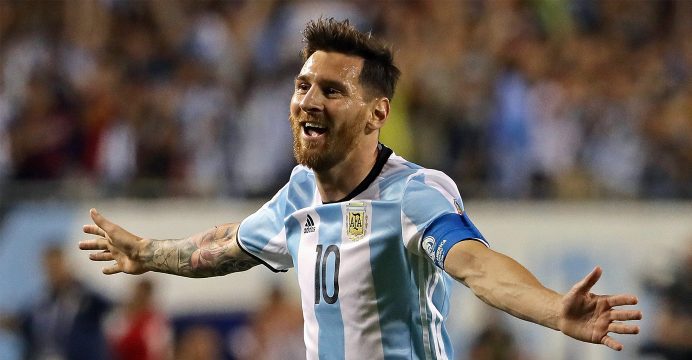 With Argentina’s hopes of qualifying for the World Cup in jeopardy, Lionel Messi scored a hat-trick when he was needed most, rallying his country to a 3-1 win over Ecuador and a spot in Russia next summer.

Argentina began the day in sixth position and in danger of not qualifying for a World Cup for the first time since 1970, Only the top four qualifying for the World Cup while the fifth goes to an intercontinental playoff against New Zealand.

But the win means Argentina will finish in third, and that books them a place along with Uruguay, Colombia and already-qualified Brazil, while Peru heads to next month’s playoff at the expense of Chile, who were eliminated.

They made a terrible start in the high-altitude location of Quito and the hosts went ahead after 38 seconds through Romario Ibarra’s goal – the quickest goal Argentina had ever conceded in a World Cup qualifier. Defender Javier Mascherano tried to head away a long ball forward, but it fell in the path of Ecuador’s Romario Ibarra, who played a headed one-two with Roberto Ordonez at the top of the box before scoring past Sergio Romero.

Argentina were level in the 11th minute as Messi pushed forward and laid the ball off to his left to Angel Di Maria, who returned the pass for the Barcelona star to roll in the equalizer.

His second goal came eight minutes later with a powerful strike from the edge of the area before a fine solo goal in the second half sealed the victory.

Messi completed his hat trick with his best of the night in the 62nd minute. After receiving the ball in space about 40 yards from goal, Messi carried the ball to the top of the box, held off a shove from the defender and scooped the ball beyond the keeper’s reach and into the net.

Many said it was going to be Messi’s last international match but the Argentine captain kept the reply as if it was for the match.

If you could win the match, it was sure that the play-off game was at least five points away from Argentina. But Brazil-Chile and Colombian-Peru match result helps Argentina to participate as the 3rd team from South America.