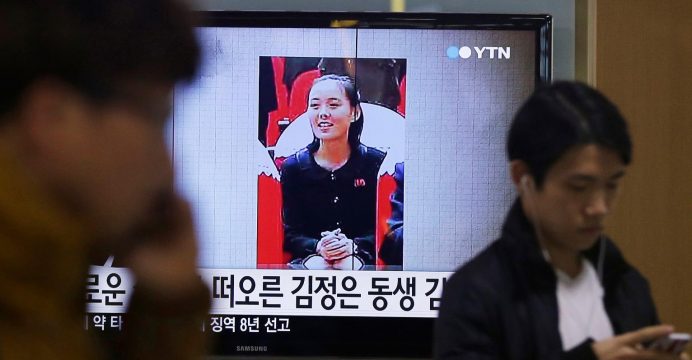 The promotion of North Korean leader Kim Jong Un’s 28-year-old sister to the country’s top decision-making body is a sign he is strengthening his position by drawing his most important people closer to the center of power, experts and officials say.

Kim Yo Jong was named as an alternate member of the politburo within the ruling Workers’ Party of Korea – the opaque, all-powerful party organ where top state affairs are decided, the North’s official media said on Sunday.

It makes her only the second woman in patriarchal North Korea to join the exclusive club after Kim Kyong Hui, who held powerful roles when her brother Kim Jong Il ruled the country.

“Since she is a female, Kim Jong Un likely does not see her as a threat and a challenge to his leadership,” said Moon Hong-sik, research fellow at the Institute for National Security Strategy. “As the saying goes ‘blood is thicker than water,’ Kim Jong Un thinks Kim Yo Jong can be trusted.”

Unlike her aunt, who was promoted to the politburo in 2012 after serving more than three decades in the party, Kim Yo Jong has risen to power at an unprecedented pace.

Kim Kyong Hui has not been seen since her husband, Jang Song Thaek, once regarded as the No.2 leader in Pyongyang, was executed in 2013. South Korea’s spy agency believes she is now in a secluded place near Pyongyang undergoing a treatment for an unidentified disease, according to an August briefing to parliament.

Jang and his wife are not the only relatives to fall from Kim Jong Un’s favor.

Kim Jong Un’s estranged half-brother, Kim Jong Nam, was killed with a toxic nerve agent at a Malaysian airport in February. Two women are on trial for the murder, which South Korean and U.S. officials believe Kim Jong Un’s regime was behind.

Kim Jong Nam, who lived in exile in Macau, had criticized his family’s dynastic rule and his brother had issued a standing order for his execution, according to some South Korean lawmakers.