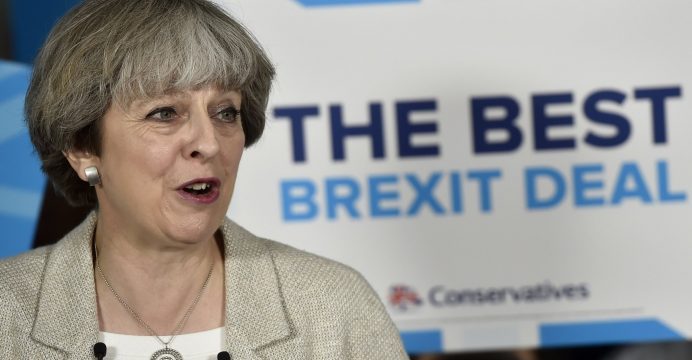 Ball in your court, weakened May tells EU on Brexit talks

British Prime Minister Theresa May will tell the European Union on Monday the “ball is in their court” in Brexit talks, trying to advance negotiations despite a party conference that left her weaker than ever.

May’s keynote speech at last week’s conference, meant to revive her premiership, was marred by a repetitive cough, a prankster handing her a bogus employment termination notice and a stage malfunction. That came after May called a snap election in June and lost her party its majority in parliament.

She has so far fought off attempts to unseat her, and now wants to refocus on Brexit talks to unravel more than 40 years of union – with just 18 months to go before the country leaves the EU and must redefine its place in the world.

But she faces more disquiet in her Conservative Party over the negotiations and how a future relationship should look.

One lawmaker has urged her to “call time” on the talks if they fail to move forward at a summit this month.

With Brussels quietly preparing for a collapse in the talks and Britain getting ready for what May calls “all eventualities”, some officials and business chiefs worry the country will crash out of the EU without a deal.

Speaking in parliament later on Monday, May will say she is determined to secure a new partnership with the other 27 members of the wealthy political and trade bloc.

“Achieving that partnership will require leadership and flexibility, not just from us but from our friends, the 27 nations of the EU,” she will say, according to excerpts of her speech.

“And as we look forward to the next stage, the ball is in their court. But I am optimistic we will receive a positive response.”