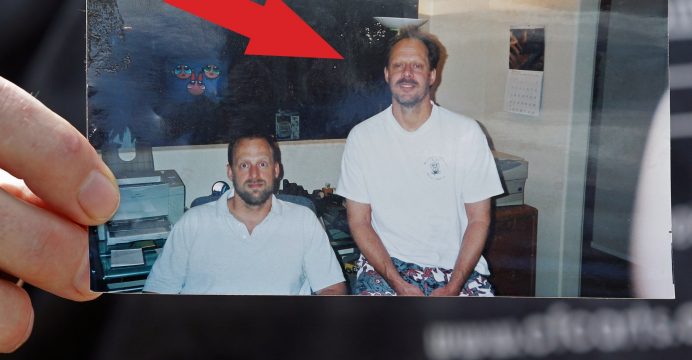 Las Vegas concert gunman Stephen Paddock was a wealthy former accountant who appeared to be living in quiet retirement with his girlfriend in a desert community.

The 64-year-old, of Mesquite, Nevada, had pilot’s and hunting licences and no criminal record, said authorities. His brother said he liked playing video poker and going on cruises.

One former neighbour said Paddock was “weird”, but others said he had no interest in extremism and had shown no sign of planning a “lone-wolf” attack.

Paddock has been identified by police as the man behind the deadliest shooting in modern US history, with the toll surpassing the 49 killed at a nightclub in Orlando, Florida, in June 2016.

He opened fire from the Mandalay Bay Hotel and Casino on Sunday night, killing at least 59 people and wounding more than 500 others, before turning the gun on himself as police closed in, said officials.

Twenty-three weapons were found in the 32nd-floor hotel room that Paddock checked into last Thursday.

Police found “in excess of” 19 firearms and thousands of rounds of ammunition in his Mesquite home, while explosives were found in the property and car.

In other words, Paddock appears to have planned his attack for some time and had the arsenal to carry it out.

David Famiglietti of the New Frontier Armory told the BBC that Paddock had purchased firearms at his store in North Las Vegas last spring, meeting all state and federal requirements, including an FBI background check.

However, the shotgun and rifle Paddock bought would not have been “capable of what we’ve seen and heard in the video without modification,” Mr Famiglietti said.

Two gun stocks were found in the hotel room, AP news agency reported, which can enable a weapon to fire hundreds of shots per minute.

The FBI said its agents had established no connection between Paddock and any overseas terrorist group, despite a claim from so-called Islamic State.

Stephen Paddock had never been in trouble with police. His only previous known brush with the law was a routine traffic violation.

But his father was a bank robber who used to be on the FBI’s most wanted list and once escaped from prison. According to a 1969 poster issued by law enforcement for the fugitive, Patrick Benjamin Paddock was “diagnosed as psychopathic”.

Eric Paddock told reporters outside his Orlando home that the family were stunned by his brother’s involvement in the Las Vegas massacre.