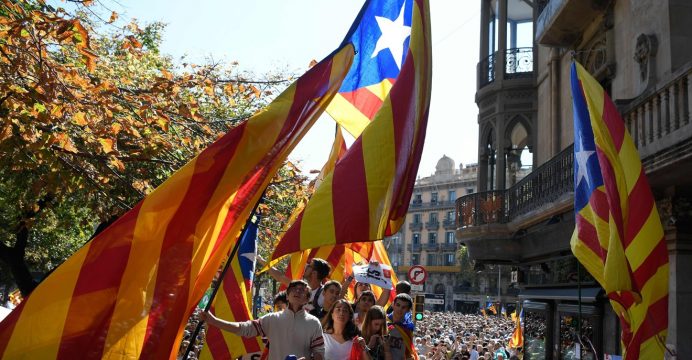 Spanish police have occupied the Catalan government’s communications hub on the eve of a banned independence referendum which Madrid is attempting to thwart, the regional authority said on Saturday.

Tens of thousands of Catalans are expected to vote in a ballot that will have no legal status as it has been blocked by Spain’s Constitutional Court and Madrid has sent thousands of police to the northeastern region to stop it taking place.

But Catalan leader Carles Puigdemont told Reuters on Friday that the referendum would go ahead regardless.

“Everything is prepared at the more than 2,000 voting points so they have ballot boxes and voting slips, and have everything people need to express their opinion,” Puigdemont said.

On Saturday a Catalan government spokesman said at least four police officers had entered the center in Barcelona which controls the regional government’s telecommunications and IT and were expected to stay there for two days.

This followed an order by Catalonia’s High Court on Friday for police to prevent electronic voting taking place. The court also instructed Google to delete an application it said was being used to spread information on the vote.

Police and Spain’s interior ministry did not confirm the action. The head of the Catalan regional police has ordered officers to evacuate and close polling stations by 6 a.m. on Sunday, before the voting is due to open at 9 a.m.

At a closing rally for the independence campaign in Barcelona on Friday, people formed the slogan “Referendum is democracy” in large white letters on a stage in front of a cheering crowd, many draped in the red-and-yellow Catalan flag.

Other Catalans camped out in polling stations in order to defy court orders to close them.