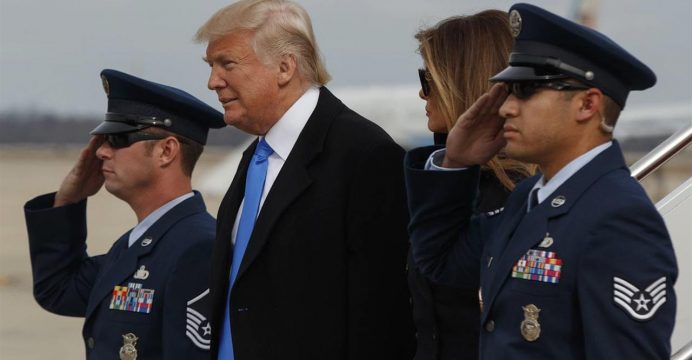 Donald Trump will travel to Asia next month for the first time since becoming president, stopping in Japan, South Korea, China, Vietnam and the Philippines on a trip expected to be dominated by the North Korea nuclear threat.

Joined by his wife Melania, Trump will travel Nov. 3-14. His visit will include attending two major summits, the Asia-Pacific Economic Cooperation forum in Vietnam and the Association of Southeast Asian Nations conclave in the Philippines.

Trump’s attendance at the Manila summit had been in doubt until recent days, with officials saying he was reluctant to reward Philippine President Rodrigo Duterte, who has been responsible for a number of anti-American outbursts.

The president, who has been engaged in an increasingly bitter war of words with North Korean leader Kim Jong Un, will have the opportunity to bolster allied resolve for what he calls the “complete denuclearization” of Pyongyang.

He has denounced Kim as a “rocket man” on a suicide mission for test launches of ballistic missiles and for nuclear weapon tests. He has warned North Korea would face total devastation if it threatens the United States. Kim has blasted Trump as “mentally deranged.”

“The president’s engagements will strengthen the international resolve to confront the North Korean threat and ensure the complete, verifiable, and irreversible denuclearization of the Korean Peninsula,” the White House said in announcing the trip.

Trump’s visit to China will reciprocate a trip to the United States made in April by Chinese President Xi Jinping. Trump has applied heavy pressure on China to rein in North Korea. While his efforts have had limited success thus far, he went out of his way to thank Xi on Tuesday for his efforts.

“I applaud China for breaking off all banking relationships with North Korea — something that people would have thought unthinkable even two months ago. I want to thank President Xi,” Trump said at a news conference with Spanish Prime Minister Mariano Rajoy.