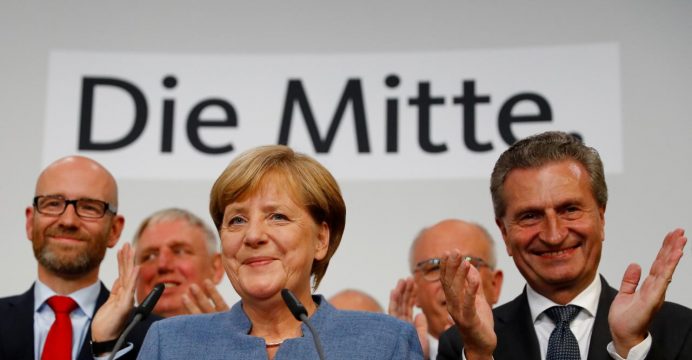 German Chancellor Angela Merkel won a fourth term in office on Sunday but Europe’s most powerful leader will have to govern with a far less stable coalition in a fractured parliament after her conservatives haemorrhaged support to a surging far right.

Two years after Merkel left German borders open to more than 1 million migrants, the anti-immigration Alternative for Germany (AfD) stunned the establishment by becoming the first far-right party to enter parliament in more than half a century.

The AfD won 13.0 percent of the vote – more than expected and one of many shocks on a night of drama that saw Merkel’s conservatives get their worst result since 1949, and her main Social Democrat (SPD) rivals their worst since 1933.

Describing the far right’s success as a test for Germans, Merkel insisted she had a mandate to govern – a formidable challenge as she has little choice but to cobble together a three-way coalition with a pro-business group and the Greens.

“Of course we had hoped for a slightly better result,” a humbled Merkel said after her conservative bloc slumped to 32.9 percent of the vote – down from 41.5 percent at the last election in 2013.

But she added: “We are the strongest party, we have the mandate to build the next government – and there cannot be a coalition government built against us.”

The euro EUR=E4 slipped around 0.4 percent in early Asian trading as it became clear the results would make forming a coalition tricky for Merkel.

Coalition building could take months as Merkel’s only straightforward path to a majority in parliament would be a three-way tie-up with the liberal Free Democrats (FDP) and the Greens – an arrangement untested at national level.

The Social Democrats, who have served with Merkel’s conservatives as junior partners in a “grand coalition” for the past four years, won just 20.6 percent of the vote, as nearly half of voters repudiated the two parties that have dominated Germany since World War Two.

SPD leader Martin Schulz said the party would refuse to rejoin a coalition and instead take up its position as the main opposition. The Social Democrats appear to have been hurt badly by being in government, making it difficult to distinguish themselves from Merkel’s conservatives.

After shock election results last year, from Britain’s vote to leave the EU to the election of U.S. President Donald Trump, leaders of Europe’s establishment have looked to Merkel to rally the liberal Western order.

A pastor’s daughter who grew up in Communist East Germany, she has acted as an anchor of stability in Europe and beyond. Now, she faces an unstable situation at home as she must form a coalition, an arduous process that could take months.