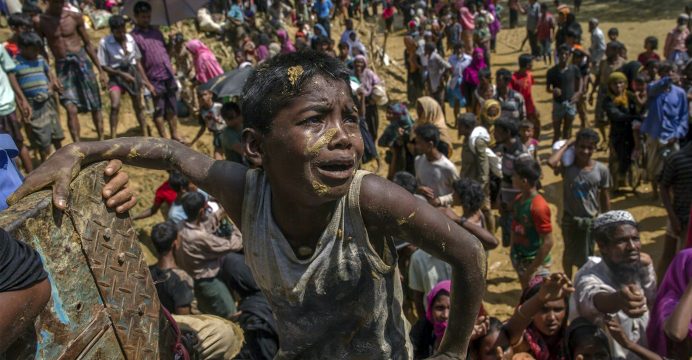 He said, as part of the assurance, UNHCR would provide Taka 35 crore immediately for construction an internal road linking the makeshift refugee shelters in Ukhia with Cox’s Bazar.

“The (proposed) internal road surrounding the makeshift camps at Kutupalong in Ukhiya upazila of Cox’s Bazar would help us develop expeditiously sanitation and other health care infrastructures and shelters,” Maya said.

Grandi’s meeting with the minister came a day after his visit to sprawling Kutapalong refugee camp, close to the Myanmar border, when he said Rohingyas had told him their stories and he was shocked by the “terrible violence” inflicted on Rohingya refugees fleeing Myanmar.

Maya said the number of Myanmar’s ethnic minority Rohingyas exceeded 4,50,000 as the fled to Bangladesh since Aug. 25, when attacks by Rohingya militants in Rakhine state triggered a Myanmar crackdown that the United Nations has branded ethnic cleansing.

He said the UNHCR also offered cooperation and financial supports for the development of infrastructure facilities like sanitation, water supply, health care service at the makeshift Rohingya camps.

“They (UNHCR) requested us to form a technical committee comprising government and UN officials for smooth functioning of these development works,” the minister said.

He, however, reiterated Bangladesh stance on the refugees saying “we are providing them shelter and food ‘temporarily’ but these people are Myanmar citizens and they must go back to Myanmar”.

Asked if the Rohingyas who fled to Bangladesh would be provided refugee status, disaster management Shah Kamal, who was present during the briefing, said “no decision has been taken yet on the matter”.

“The matter will be decided after discussions with Myanmar government,” Kamal said.

Maya, however, said in case the crisis lingered, the government planned to relocate them in offshore island of Bhasanchar also called as Tehngar Char where 2000 acres of land was earmarked for their refuge.

The minister said he assured the UNHCR delegation of conveying their proposals to Prime Minister Sheikh Hasina on her return home and the outcome would be conveyed immediately to the agency”.

The United Nations earlier appealed for massive help for the Rohingyas who have fled a military offensive in their home in western Myanmar’s Rakhine State.

The UN refugee agency chief said yesterday while visiting the camp while UNHCR said Grandi was set tohold a press conference later today but visiting the refugee camp yesterday the UNHCR chief said he was really struck by “the fear that these people carry with themselves, what they have gone through and seen back in Myanmar”.

“Parents killed, families divided, wounds inflicted, rapes perpetrated on women. There’s a lot of terrible violence that has occurred and it will take a long time for people to heal their wounds, longer than satisfying their basic needs,” Grandi said.