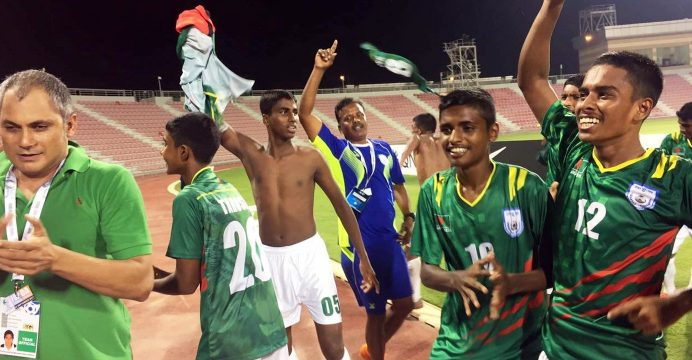 The Bangladesh national U16 team has beaten Qatar 2-0 in their last and final group game of the AFC U16 Championship 2018 qualifiers.In the Group E clash on Sunday evening, the Red and Greens played a commanding game and were unlucky to score only two.

Qatar made five changes to the team after losing 6-1 to Yemen on Matchday One while Bangladesh fielded the same starting lineup that had lost 2-0 to the same opponents.The U16 boys mounted the pressure on the Middle-Easterns from the very beginning of the game. But lack of clinical finishing and some good defending by Qatar kept Bangladesh at bay.

Bangladesh had the best opportunity in the first half when Miraj Molla was released on the left after a long clearance from Yeasin Arafat.The forward did well to beat his marker Abdulrahman Al Basti for pace, but his touch was too heavy, allowing keeper Yousef Balideh to come off his line and collect the ball.The two teams went into the break 0-0 with Bangladesh ruing a handful of missed chances.In the second half however, the visiting strikers found the cutting edge in the final third of the pitch.

Bangladesh were clearly the better team in the second period but missed out on two opportunities in quick succession.First Molla blasted over the bar with only the goalkeeper to beat in the 61st minute and moments later, Dipok Roy also missed in similar fashion.But Roy redeemed himself shortly after when he rose above a crowd of Qatari defenders to head home a corner from the right by Molla in the 70th minute.

With the confidence of that goal, Bangladesh turned on the heat and were keeping the Qatar defence busy as a bee.On the 82nd minute, attacking midfielder Foysal Ahmed Fahim scored the second goal beating Qatari goalie Balideh with a low shot from outside the box and confirmed 3 points for Bangladesh.With the win, Bangladesh ended up as the group runners-up behind Yemen who topped the group with 6 points from 2 games.

Bangladesh has 3 from two and Qatar has none.Notably, Group E became a 3-team group as fourth country United Arab Emirates (UAE) failed to show up in Qatar to compete in the tournament.Apart from the ten group champions, 6 best runners-up teams will also qualify for the main championship next year.Bangladesh will now have to wait and see if they can be among those 6 teams and have a shot at the Asian Championship next year.