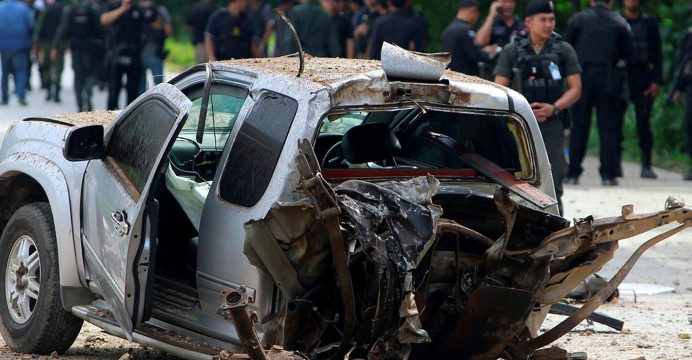 Four Thai army rangers were killed Friday when a roadside bomb tore through their truck as they were securing a road for teachers, an army official said, the latest carnage in an insurgency roiling the kingdom’s far south, reports BSS.

The Muslim-majority region that borders Malaysia has seethed with violence for over a decade as ethnic Malay insurgents battle the Buddhist-majority state for more autonomy.

More than 6,800 people have died the majority civilians in a conflict marked by weekly bombings and shooting attacks.

But teachers, local officials and other perceived collaborators with the state are also frequently swept up in the violence.

The group was on a routine early morning patrol to clear a road used by teachers in Sai Buri district when the bomb erupted, tearing their truck in two.

The explosive was detonated after four of the rangers stepped out of the car to inspect a drainage tunnel, the southern Internal Security Operation Command (ISOC) said in statement.

“The incident was aimed to incite the unrest and violence in the region without regard for the safety and livelihood of residents,” it added.

The attack comes as the Thai junta pursues talks with an umbrella group claiming to represent the rebels.

So far the meetings have borne little fruit, with experts saying the rebel negotiators lack control over fighters on the ground.

The shadowy Barisan Revolusi Nasional (BRN) faction is believed to be behind most of the violence in the region, although it never claims attacks and shuns publicity.