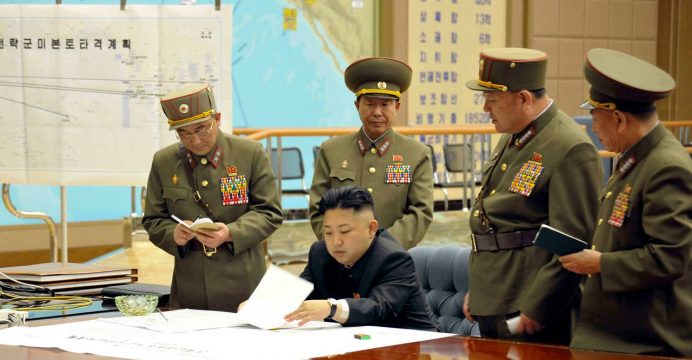 North Korea said on Saturday it aims to reach an “equilibrium” of military force with the United States, which earlier signaled its patience for diplomacy is wearing thin after Pyongyang fired a missile over Japan for the second time in under a month.

“Our final goal is to establish the equilibrium of real force with the U.S. and make the U.S. rulers dare not talk about military option,” North Korean leader Kim Jong Un was quoted as saying by the state news agency, KCNA.

Kim was shown beaming as he watched the missile fly from a moving launcher in photos released by the agency, surrounded by several officials.

“The combat efficiency and reliability of Hwasong-12 were thoroughly verified,” said Kim as quoted by KCNA. Kim added the North’s goal of completing its nuclear force had “nearly reached the terminal”.

North Korea has launched dozens of missiles under Kim’s leadership as it accelerates a weapons program designed to give it the ability to target the United States with a powerful, nuclear-tipped missile.

“We’ve been kicking the can down the road, and we’re out of road,” McMaster told reporters, referring to Pyongyang’s repeated missile tests in defiance of international pressure.

It had already stepped up sanctions against North Korea in response to a nuclear bomb test on Sept. 3, imposing a ban on North Korea’s textile exports and capping its imports of crude oil.

The U.S. ambassador to the United Nations, Nikki Haley, echoed McMaster’s strong rhetoric, even as she said Washington’s preferred resolution to the crisis is through diplomacy and sanctions.

U.S. President Donald Trump said that he is “more confident than ever that our options in addressing this threat are both effective and overwhelming.” He said at Joint Base Andrews near Washington that North Korea “has once again shown its utter contempt for its neighbors and for the entire world community.”